The two- and four-door models revive the spirit of Ford’s iconic 4×4—and the manual transmission. 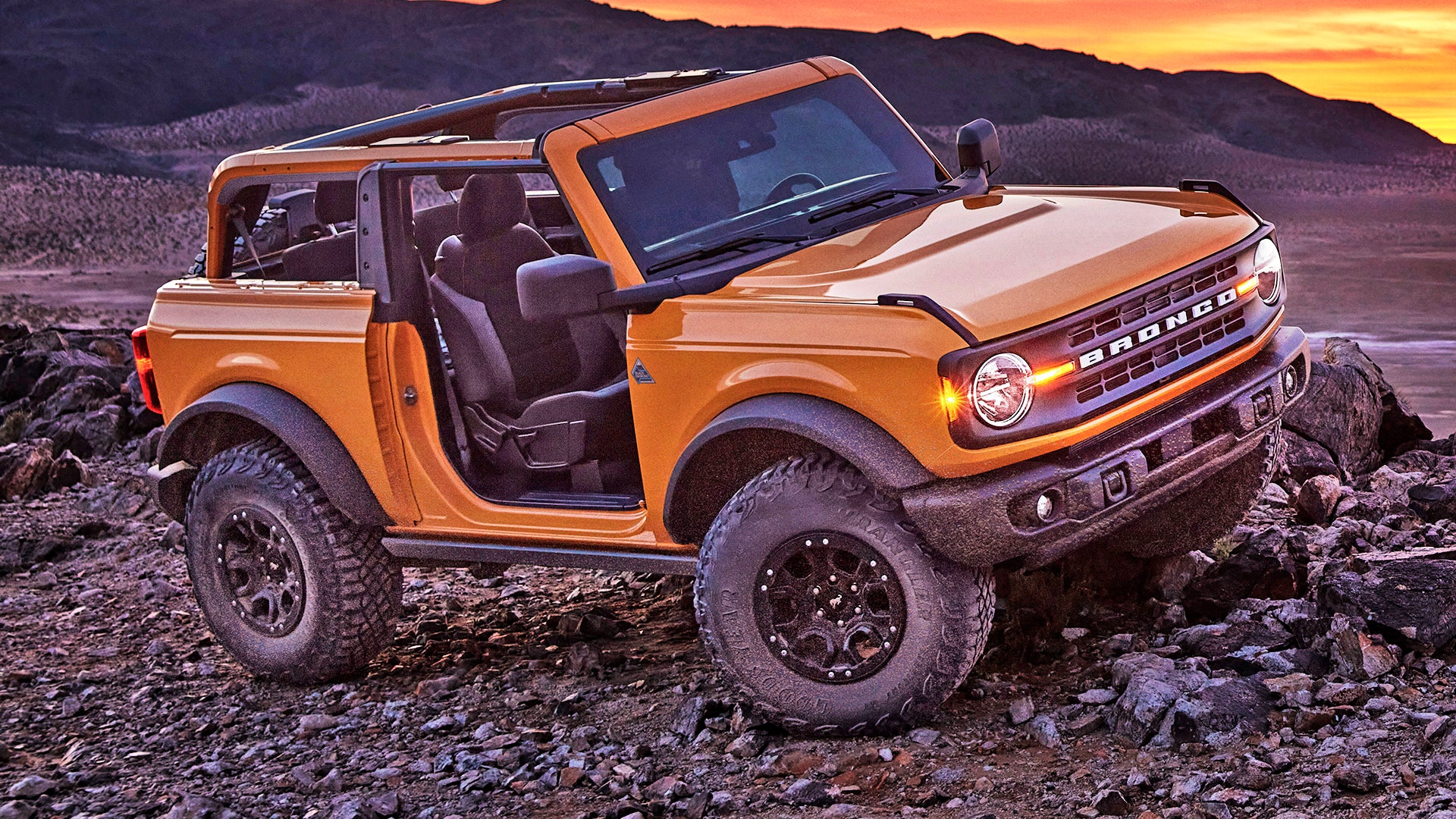 In case you doubted the 2021 Ford Bronco would ever come, it's real and it's finally here. And it's not some cheap grab for nostalgia; rest assured, Ford didn't forget what made the original Bronco great. So the 2021 redux is built for fun first and foremost, a pair of doorless, roofless, two- and four-door missiles aimed straight at the Jeep Wrangler and its lock on the off-road enthusiast market. The new Bronco is one of the boldest bets in a while—but if the early specs are any indication, it might just pay off handsomely for Ford.

This being the Bronco's first appearance in the 21st century—Ford last sold one in 1996—plenty has changed. It's no longer the brutal V8 rig that values sheer grunt over finesse. Still, it packs more power than ever before in either of the new turbo-four (270 hp, 310 lb-ft) or twin-turbo V6 (310 hp, 400 lb-ft) engine options, and it's got more technology-based off-roading tricks than any other SUV in its class. Traditionalists can rest easy knowing that those future-forward touches are pared with time-honored parts like an available seven-speed manual transmission with a crawler gear and a tough Dana 44 solid rear axle.

In short, on paper it's absolutely a worthy successor to Broncos of yore. (For a more cautionary tale, see the new Chevrolet Blazer.) We'll let the truck do the talking, though.

Sharp angles are everywhere on the 2021 Bronco, reminiscent of the model's debut some 55 years ago. Of course, there's never been a four-door model from the factory until now, though Ford's design team has done a great job of keeping it true and clean. That's not to say it isn't extreme—nearly everything about the revived off-roader is exaggerated, especially when it's riding on the optional 35-inch Goodyear Territory mud terrains. And that's good for the adventurous 4x4 segment.

The hood creases are instantly recognizable, and they offer more than just stellar aesthetics—built-in tie-down points provide utility for stowing large items like kayaks overhead. They also give the driver a quick reference point to know where the corners of the rig are at all times and pull triple duty as functional Go Pro camera mounts.

While oval headlights with symmetrical bisecting lines shine proudly on every 2021 Bronco, Ford has designed a plethora of front grille options, some of which take inspiration from past Broncos while others are decisively modern. Regardless of the chosen design, which range from sparse to a full mesh look, the word "Bronco" spans from one headlamp to the other.

Widened fenders give plenty of room for upsized tires—they have to, because 35s.

As for the roof and doors, they're both easily removable, though the exact mechanisms for each haven't been revealed just yet. The latter can even be stored behind the rear seats in individual carrying cases so there's no worry of leaving them behind in your garage or on the trail. Meanwhile, the roof can be taken out in sections, letting in sunlight over just the front seats or the entire cabin. There's no cross-mounted overhead pillar either, meaning the experience is totally open-air like a traditional convertible.

At the rear, a spare tire carrier is prominently mounted in the middle with a Bronco emblem promptly to the right. Tall and slender taillights keep up the trimmed aesthetic as does the high-and-tight rear bumper, which aids in providing a best-in-class departure angle.

The design inherently lends itself to extreme obstacle clearance. When fitted with 35-inch tires, both the two- and four-door Broncos boast an approach angle of 43.2 degrees. The breakover, then, is 21.1 and 20.0 degrees while the departure is listed at 37.2 and 37.0 for the two- and four-door, respectively.

The 2021 Bronco rides on a revised version of the Ranger pickup's T6 architecture, making it smaller and more nimble than if it had been built on an F-150 base. Notably, it exclusively features independent front suspension rather than the more-common solid-axle used in similar off-road applications. Ford Chief of Product Development Hau Thai-Tang explained to The Drive that this departure was made in the name of high-speed off-roading, something the Bronco aims to tackle like its Ford Raptor brethren rather than the low-speed-special Wrangler.

The high-strength steel frame is fully boxed and allows for supreme suspension travel, which Ford claims to be 17 percent better at the front and rear than its closest competitor.

As we pretty much knew all along, the 2021 Bronco does not have a V8 option. Since it rides on the same T6 architecture as the Ranger pickup, albeit updated, it shares its 2.3-liter turbo four-cylinder in base form. It's good for 270 horsepower and 310 pound-feet of torque, and it even comes standard with that buzzed-about manual transmission.

It's effectively a six-speed with reverse and a crawler gear, which offers an impressive crawl ratio of 94.75:1. Maneuvering through a tight trail is made even tougher when you have to balance the clutch and the gas, but that's almost entirely negated with a crawler gear. Instead, the Bronco can essentially move itself at super-slow speeds while still having enough oomph to climb steep boulders as the driver carefully positions their wheels. If you're off-roading with a stick-shift, it's a massive plus.

Finally, the top-spec Bronco engine is a 2.7-liter EcoBoost V6 borrowed from the F-150, standard on the Wildtrek, Badlands, and First Edition trims for 2021. It packs substantially more power than the four-pot with 310 hp and 400 pound-feet, and it compares nicely to its Wrangler archrival. It edges out the Jeep's 3.6-liter gasoline V6 by 25 horsepower, though in EcoDiesel spec, the Wrangler touts 442 pound-feet of torque. Ford actually tested this power plant in the Bronco R Baja 1000 racer, so just know it's powerful and resilient.

The seven-speed tragically isn't available with the potent 2.7-liter V6, meaning a 10-speed automatic is the sole transmission on offer. You can also fit the 2.3-liter with the 10-speed, though what's the point if the stick is really a no-cost option? Regardless, the automatic provides a max crawl ratio of 67.8:1 with the advanced two-speed transfer case, which is pretty all right on its own.

More than the styling, more than the powertrains, more than just about anything—this is where the Bronco comes into its own. We already touched on the truck's independent front suspension and crawl ratios, but there's much, much more to it than that. Take a look at the Bronco in action below, and keep reading for all the fun details.

First is the selection of terrain-specific drive modes, laughably called G.O.A.T. modes. Despite the funny name, which stands for Go Over Any Terrain and not Greatest of All Time, these adjust the Bronco's driveline behavior to perform at its peak in various conditions like Baja, Slippery and Sand, Mud/Ruts and Rock Crawl. As many as seven G.O.A.T. modes are available on the Bronco from trim to trim.

There's also Trail Control, which locks into a certain pace up to 20 mph off road and controls the brakes and throttle to allow the driver to focus on putting their wheels where they need to be.

Like the Wrangler Rubicon, Ford's all-new Bronco packs an available quick-disconnecting stabilizer bar for improved suspension articulation. Unlike its competitors, however, it can disconnect during articulation and reconnect under all conditions to get back to high-speed off-roading. Baja-style driving was a major emphasis for Ford in the Bronco's development, and this is just another example of proof.

Electronic front and rear locking differentials are available as well to keep all four tires spinning when traction is limited.

Trail Turn Assist is perhaps the most interesting tech feature as it tightens the Bronco's turning radius by braking the inside rear wheel, applying power to the others and helping it to pivot in minimal-space conditions. It's not quite as drastic as Rivian's Tank Turn, though we saw it in action earlier this year in a Bronco teaser.

Lastly, the new SYNC4 infotainment is made even more useful by displaying views from the 360-degree camera system, providing insights to off-road telemetry, and showing expertly developed off-road maps from NeoTreks’ AccuTerra Maps, Trails Offroad trail guides and FunTreks trail guides. It's capable of over-the-air (OTA) updates that can be installed when most convenient, like at night when the Bronco is parked.

An eight-inch SYNC4 display is standard starting at the Bronco base while a 12-inch screen is available on higher trims.

The rugged and durable ethos carries on to the Bronco's interior. The different trims have interior finishings that range from marine-grade vinyl to real leather on the 10-way adjustable power front seats, and a hose-out rubber floor has built-in drain plugs for easy cleaning.

Built-in accessory mounts practically make the Bronco a rolling studio slash home base with purpose-made GoPro mounts on the dash, MOLLE hooks on the seatbacks, and interchangeable grab handles for easier ingress and egress when the going gets tilty.

There's no shortage of premium appointments for the Bronco, nor is there an excess of standard niceties that some folks simply don't need. It can be as bare-bones or comfy as you so wish—you've just got to find the right fit.

One of the seven Bronco trims is likely to get the job done for you. The full list includes the Bronco base, Big Bend, Black Diamond and Outer Banks, along with Wildtrak and Badlands for those who want more dedicated 4x4s from the factory. The latter two come standard with 35-inch tires—hell yes—though these mighty rollers can be fitted to any model so long as it's equipped with the Sasquatch package. If you tick that box, you also get 17-inch beadlock-capable wheels, front and rear lockers, high-clearance suspension and position-sensitive Bilstein shock absorbers.

A limited run First Edition will also be available to high-paying customers, packing the Badlands' mechanicals, Outer Banks' interior features, and Wildtrak's exterior features. Ford says just 3,500 of these will be made.

Don't sleep on the base Bronco's steel wheels, either.

Now that we've gone through the 2021 Bronco's array of features and gadgets, it's time to talk price. Impressively, for the two-door model, Ford has held the starting price to $29,995 including delivery. Step up to a four-door and you'll spend at least $34,695, though many will exceed that number far and clear as customers and dealers tack on one option after another. No trim-specific pricing was mentioned by Ford during the Bronco's release, though it wouldn't be surprising to see top-spec models break the $60,000 mark.

Customers can place a $100 refundable deposit starting now for their own Bronco with deliveries expected to start in early 2021. Until then, we'll be chomping at the bit to get our hands on one for testing.