The first rule of shopping for a VW Golf R: don’t drive the GTI. 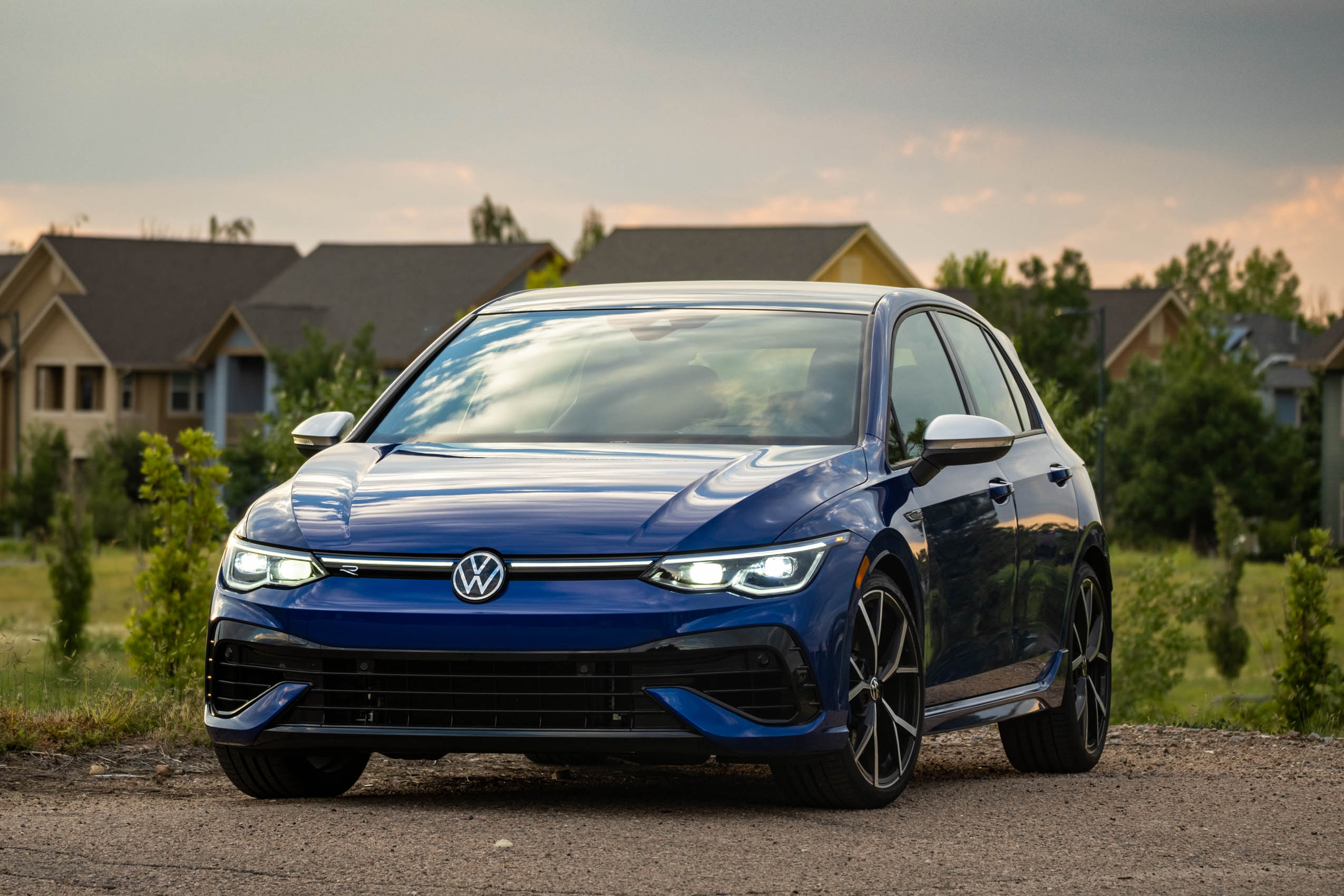 © The 2022 VW Golf R Forced Me To Confront the Lies of My Youth
Share This
Article:
Font size:
Write a Comment Report
Print

If you’re old like me, you’re a liar like me. That’s not an indictment—aging makes us liars. Honestly, I didn’t see Pearl Jam in my friend’s basement in 1993. I probably wore wide-leg jeans, bleached my hair and, no, I didn’t think Crystal Clear Pepsi was dumb at the time. I may have told you differently at times—I can’t help it. Tomorrow I’ll slip into senility and begin to believe it all. In 10 more years, I’ll pass a polygraph that I saw Eddie Vedder and company in my neighbor’s basement once. It’s how these things go. When a 2022 Volkswagen Golf R fell in my lap for a week, I was forced to confront yet another embarrassing confession: I never drove a first-gen VW GTI until I was well into my 30s.

Behind the wheel of the new one, I felt at home with the latest in a long line of hot VW hatches I’ve probably lied about. Its notchy, short-throw six-speed manual transmission felt just as positive as I (mis)remembered; the practicality and fun of a hot hatch reminded me of my time at Ridgemont High. Oh, how I miss my good friend Jeff Spicoli.

The 2022 Volkswagen Golf R wears the uneasy crown of VW’s latest—and likely last generation—gasoline-only powered hot hatch. There’s still a GTI, and I probably prefer it over the Golf R for reasons I’ll explain later, but the Golf R owns the superlatives of the most powerful, most expensive, and fastest VW on lots today.

From the outside, the Golf R is a smedium hatch with similar swoleness. The fenders flare, the exhausts flex, and the little hatch looks like it hit the gym hard compared to most of the rest of the VW range. The Golf R is also reserved in every way that’s German—there’s a small, sans-serif “Volkswagen” on the B-pillar to remind you that font frippery has no place in German engineering.

Inside, the Golf R is perhaps at its best and worst. While the functionality of a four-door hatchback can’t be argued and I love all of them, the Golf R is overly complicated. There are touch controls for just about everything, and the conveniences create clutter. For example, a car that’s a relative postage stamp on the road doesn’t need separate controls for front and rear climate controls.

What’s under the hood is the star of this show, and likely the last for the Golf R. It’s a 2.0-liter turbo-four that makes 315 horsepower and 280 lb-ft of torque hooked up to a six-speed manual or seven-speed dual-clutch automatic. To be fair, the auto 'box makes more sense in the Golf R, not the six-speed stick I drove. The automatic isn’t only the quickest way to swap cogs, it’s also the one that offers the most satisfying feedback. The manual’s clutch is a little light, a little too high, and not particularly engaging. As in prior generations, I’ve been a bigger fan of a three-pedal setup in the GTI compared to the Golf R—it’s more manageable in those and here.

Back to lying about our collective youth: Yesteryear was far more uncomfortable than we remember. No, the church-pew rear bench in the family wagon wasn’t fertile grounds for imagination and Hot Wheels; if you survived the road trip to your cousins in the summer, you did so with powdered vertebrae. The same goes for infotainment—a word that used to apply exclusively to episodes of Sesame Street.

That isn’t to say the Golf R is boring when the roads turn interesting. Between myriad electronics working in the background, it’s VW’s singular focus on retaining a rev-happy engine and engaging gearbox that’s made Volkswagen hatches entertaining and exceptional for nearly four decades. Big points there.

What’s left in the Golf R is an entirely practical hatch that’s comfortable and fun to drive. If you’re considering one, it’d be best not to drive a GTI. For nine out of 10 situations, the GTI offers similar performance and drivability, with an approachability that’s entirely in line with its price. The Golf R turns the dial up to 10, and along with an all-wheel-drive system, punches enough hp through the busy turbo-four that makes you feel like you’re the weak link.

Forget all that and enjoy the Golf R for its technological mastery and gasoline-powered goodness and you’re in the right place. Click through the short-shift gears in your manual-equipped Golf R and hold them longer than you need around the next sweeping corner. There are plenty of reasons to enjoy what the Golf R has to offer, but chief among them is nostalgia.

Of course, I’d be remiss in mentioning the headlining feature about the Mk8 Golf R and GTI that’s been a lightning rod since they were released: the touch controls. The honest perspective that age has given me is, life’s too short to argue about touchscreens. Sure, it could be better, but it's also not a rational reason to pass over the Golf R. After a week of living with this car, it’s clear that the touch controls are not the VW hatch’s least desirable feature: that’d be its price.

The 2022 VW Golf R commands $45,185, and aside from dealer options or an automatic transmission for $800 more, they’re all the same. My tester cost $45,185 and it’s hard to justify its value in a vacuum or otherwise. Any VW crossover costs less, and offers all-wheel drive, a tall ride height, and practicality that a small hatch just doesn’t have. In a vacuum, I similarly struggle with a $45,000 hatchback because there’s enough inside to indicate that you’re not only paying for the powertrain, but also technology. I’d prefer a more analog nostalgia, whether right or wrong.

In that way, the VW Golf R’s competitors are few and far between. The Subaru WRX STI is gone, and the Focus RS is too. The Audi RS3 is an unlikely competitor, but also a different beast. The Hyundai Elantra N, and Honda Civic Type R exist in different planes, whether by expectation or lineage; the former has few expectations being from a nascent performance division, and the latter leans heavily on boy-racer looks that its owners want.

In manual form, the Golf R is rated for 20 mpg in the city, 28 on the highway, and 23 combined. Official economy figures for the Toyota GR Corolla and upcoming Honda Civic Type R have not been released yet but, for what it’s worth, the Golf is less efficient overall than the six-speed Hyundai Elantra N by a couple of mpg. Premium fuel is required. This isn’t so much a direct competitive comparison but rather to quench your curiosity, but the less powerful GTI gets 28 mpg combined.

Taken alone, the Golf R represents a glossy version of what older millennials know now: Youth (or youth, to the best of our fading memories) is best remembered with modern conveniences. I’ll see Pearl Jam in a stadium with a seat all my own, concessions, bathrooms, and paid parking—no basement concerts for me again.

Taken among the crowd: The Golf R represents an infrequent use case. It’s more serious, more powerful, and more everything than the GTI, which costs about $15,000 less. There used to be a few reasons why the R made sense above GTI—trackability, handling, engagement—but there are fewer now. The Golf R is more specialized now than it's ever been, and it’s making less sense in VW’s future.

This car represents perhaps the last gas-only Golf R we’re likely to see and the last of a generation. Nostalgia may be a bigger reason to consider it, rather than superlative performance. If you do want that feeling of owning perhaps the last gas-only hot VW hatch—and there are reasons to—just remember: touch controls rule our world. Or another way to say the same thing, and to quote my good friend from high school Spicoli: “Aloha, Mr. Hand.”