The performance is downright violent. 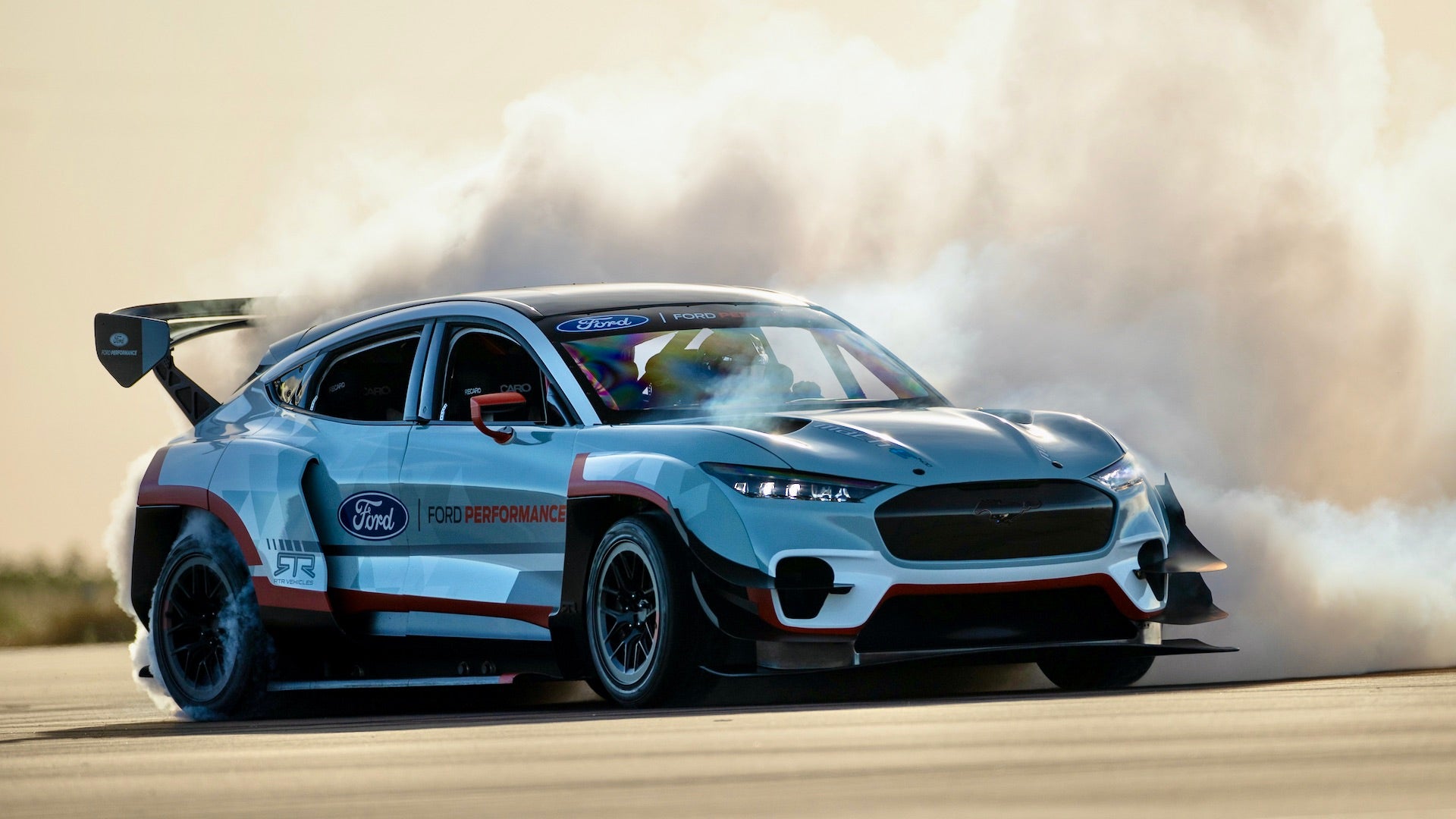 A couple of weeks back, a curious cat filmed a mysterious Ford Mustang Mach-E prototype moving like something not of this earth, and kicking up more smoke than a forest fire. As it turns out, we were looking at a shakedown of Ford Performance and RTR Vehicles' newest collaboration; the 1,400-horsepower, seven-motor Mustang Mach-E 1400 prototype.

Taking over 10,000 man-hours to build and inspired by the Mustang Cobra Jet 1400 electric drag prototype, the Mach-E 1400 is Ford's way of showing that electric drive is no performance compromise from a dystopian timeline. As anyone who has driven an electric car or two can attest, they're not here to replace internal combustion but are something new, unique, and compelling. It's hard to get more compelling than a wide-bodied, aero-heavy prototype with almost twice as many electric motors as seats.

Drawing power from a 58.6-kWh nickel, manganese, and cobalt battery, these seven motors—three powering the front differential and four the rear—can slam down an estimated 1,400 peak horsepower. Were it not for aero developed through the same channels as Ford Performance's race cars, these would be enough to send the lightened, entirely composite-bodied Mach-E 1400 airborne. At 160 miles per hour, its front splitter, canards, and ginormous rear wing combine to generate a monumental 2,600 pounds of downforce, or roughly 400 more than is produced by a McLaren Senna GTR.

To take full advantage of this aero, Ford Performance and RTR maximized the Mach-E 1400's chassis and powertrain layout, allowing it to be set up for anything from Gymkhana and drifting to road racing and time attack with front, rear, or all-wheel drive as needed.

Lending a hand in all scenarios is an electronically boosted Brembo brake system, which balances antilock friction brakes with stability control and regenerative braking, which converts forward motion back into electricity. And to kick the back out, there's an integral hydraulic handbrake, whose actuation shuts off all power to the rear wheels.

"Getting behind the wheel of this car has completely changed my perspective on what power and torque can be," said RTR Vehicles founder and Mach-E 1400 test driver, Vaughn Gittin Jr. "This experience is like nothing you've ever imagined, except for maybe a magnetic roller coaster."

"Mustang Mach-E 1400 is absolutely intended for experiential use to showcase how cool electrification can be," said Ford's Global EV Communications Manager Emma Bergg. She adds that when COVID-19 blows over, the Mach-E 1400's back seats will be open to many an open-minded passenger. "With Mustang Mach-E, all-electric Transit and F-150 coming too, it makes sense for us to build excitement for Ford electric vehicles."

In the nearer future, the Mach-E 1400 will make its public debut at a NASCAR event, though in what capacity is not yet known. One can't help hoping Ford eventually takes it racing....or for a showdown with the many-record-holding Volkswagen ID.R.