Everything you need to know about where public EV charging is in the U.S. in 2021, and where it might go next. 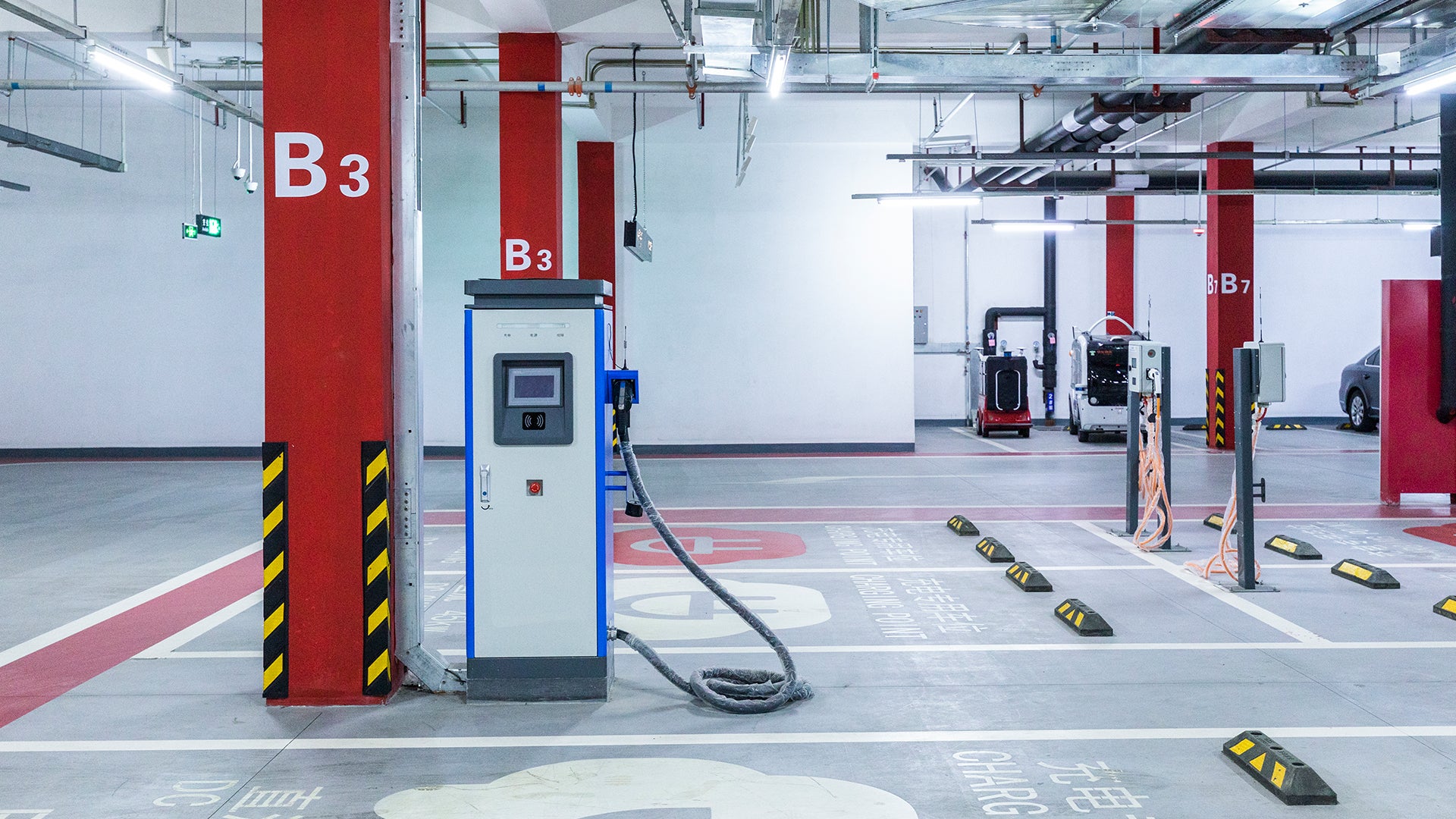 As the $1 trillion bipartisan infrastructure bill inches its way through Congress as a key part of President Joe Biden's domestic agenda, many people have high hopes for its promises (and not just Democrats who hope to keep their jobs next year). Automakers and prospective electric vehicle owners alike have their fingers crossed for provisions that could have a meaningful impact on the number of battery-powered cars on the streets.

Many are closely watching to see just how the bill impacts them, whether it be a federal tax subsidy subtracted at the time of purchase, an increased demand of a particular vehicle based on where it's built, or the impact on consumer spending.

One drastic recent change to the bill as it moves through the legislative process, however, could affect one of the most critical points of adoption: the public charging infrastructure.

In April, the Biden administration unveiled its take on the infrastructure bill. Over seven months, lawmakers slimmed out costs considerably, slashing the budgeted number in half, from $2 trillion down to $1 trillion—that includes halving the once boisterous $15 billion aimed towards building out 500,000 public plugs across the nation by 2030.

pledges a leaner $7.5 billion to that cause (which includes funding for hydrogen and other alternative fuels) though the White House continues to tout Biden's goal of 500,000 nationwide chargers. Despite the money being halved, that won't necessarily prevent the goal from being reached, though it may lift the government's metaphorical foot off of the accelerator a bit.

Project locations where chargers can be installed, according to the bill, are limited to publicly accessible locations. This means public roads, schools, parks, and government-owned facilities. However, the bill also calls for the inclusion of privately owned parking facilities, so as long as they are accessible by the public. Priority will be given to infrastructure built in rural places, as well as low-and-moderate-income areas. Additionally, communities with a low parking-to-household ratio or with a high concentration of multiunit dwellings will be prioritized.

To better understand how this new funding bill might—and that last word is very important here—affect the public charging landscape, let's wrap our heads around what charging looks like today.

Many states and local governments have gotten the charger placement process down like science, especially in areas where EV adoption is more common. Think fast charging along high-volume, long-haul corridors like highways, and slower charging where someone might park their car and have a bit of dwell time. For places with less than stellar EV adoption rates, the public charging infrastructure is... well, admittedly, abysmal. And this is where a bit of taxpayer-funded assistance can help.

Before we get too deep into the numbers, let's talk about what qualifies as a charger. Contrary to popular belief, a "charger" isn't as simple as a place to juice up one's car. The U.S. Department of Energy breaks down three key terms that help to clarify:

That being said, the DoE's Alternative Fuels Data Center helps to keep track of the number of electric charging states that the U.S. At the time of writing, there are 110,142 EVSE Ports across the nation, however, these EVSE Ports are concentrated to allow for charging of approximately 2.5 vehicles to every one Station. In total, there are 45,060 Station locations in the U.S.

Next, charging is broken down into levels, which represent the amount of electricity that a charger can supply to a vehicle.

The majority of established public charging locations in the U.S. today are Level 2-capable. In fact, the Department of Energy says that more than 81 percent of all chargers are rated for Level 2 charging.

However, a great deal of these chargers uses the proprietary Tesla charging connector. Tesla's network actually accounts for 58 percent of all Level 3 charging ports in the U.S., as of this writing.

At the present time, non-Tesla vehicles cannot make use of these chargers (they have a software component as well for billing), though CEO Elon Musk has said the company will work to open its chargers up to other cars using adapters eventually. CCS-equipped vehicles are currently undergoing a pilot for this program in the Netherlands today.

We're a society that demands instant gratification. We want our Amazon packages to be delivered yesterday, our Hulu ad-free, and our fill-ups to take minutes. But with current battery technology, that last bit simply isn't possible. Instead, we need to reshape the way that we think about charging, and the answer to this problem is something that has been staring us in the face for years: distributed charging, or densely-packed charging infrastructure that gives EV drivers the ability to charge their vehicle while out and about doing everyday tasks.

I mentioned that approximately 81 percent of all chargers deployed in the U.S. are Level 2 destination chargers. That number is likely to stay well above Level 3 fast charging. Mike Battaglia, Senior Vice President of Sales at Blink Charging, told The Drive that his company deploys approximately between seven and nine destination chargers for every Level 3 charger that it installs.

Charging providers are planning to increase the number of Level 2 chargers that they install around the nation, but they want to focus on areas where you can do two things at once. For example, fast-charging while grocery shopping, or topping-off while the kids are playing at the park. The idea is to maintain a balance of charge throughout the day until you can plug in at home overnight.

The infrastructure bill is also projected to help EV owners who don't own homes. For those who street park in urban centers, or people who live in apartment complexes, states may shape the bill in such a way that benefits these types of residents, accelerating adoption in communities that would not have otherwise considered an EV due to concerns over charging locations.

Why Are Electric Chargers So Expensive?

We've talked about the electric car and public charging being a hot dog and bun problem, and that notion isn't going away. It simply isn't feasible from a cost or supply perspective to install one charger for every single EV on the road, just like we don't deploy a gas station for every single gasoline-powered car on the road. (That number is closer to 1,912 cars for every gas station on the road—even though filling up at the pump is significantly quicker than charging).

The main driving factor in the cost of a charger is the speed at which it can charge a car. Installing a Level 2 charger might cost a charging provider around $2,000 for hardware. A Level 3 charger, however, is a whole different beast.

The price for a 50-kilowatt DC fast charger starts at around $30,000 just for hardware alone, according to Battaglia. And those prices begin to climb significantly as charging speed increases and hardware requirements call for appointments like water-cooled cables and other improvements.

And that doesn't even take into account installation cost. A typical Level 2 charger might cost between $6,000 and 8,000 to install, whereas a Level 3 charger could cost as much as $50,000 depending on the technical scope of the project. Needless to say, cost single-handedly makes it impractical to install these Level 3 fast chargers on every street corner.

It's no secret that the U.S. is still rushing towards EVs at full tilt, and the Biden administration's rather ambitious goal of electrified vehicles making up half of all new car sales by 2030 is undoubtedly adding steam to the push. However, the public charging infrastructure, especially Level 3 fast charging, will need to rapidly keep pace with EV growth over the next decade to make that transition as smooth as possible.

Once Biden signs the bill, as he's expected to do on Monday, the next steps could happen fairly quickly. Grants would be dispersed to state, local, tribal, and territorial governments, as well as special-purpose districts (like port authorities.) The recipients would then become the bottleneck of deciding just how to spend the money, within the federally defined project guidelines mentioned above. States may decide to provide grants, rebates, or other forms of funding, and along the way, provide strict guidelines on how companies can dip into funding to deploy charging. This could include how and where to deploy chargers, as well as the speed and charger types that qualify.

Regardless, EV charging companies are ready to jump at funding, meaning that a rapid influx may be on the horizon. However, recent COVID-induced supply chain issues cause unexpected problems, including exacerbated costs and limited availability of parts needed to build new chargers.

More EVs are coming, but the charging infrastructure has a long way to go to match our electric dreams.