The Honda Civic Type R’s final days are winding down, leaving behind some pretty sizable shoes to fill. 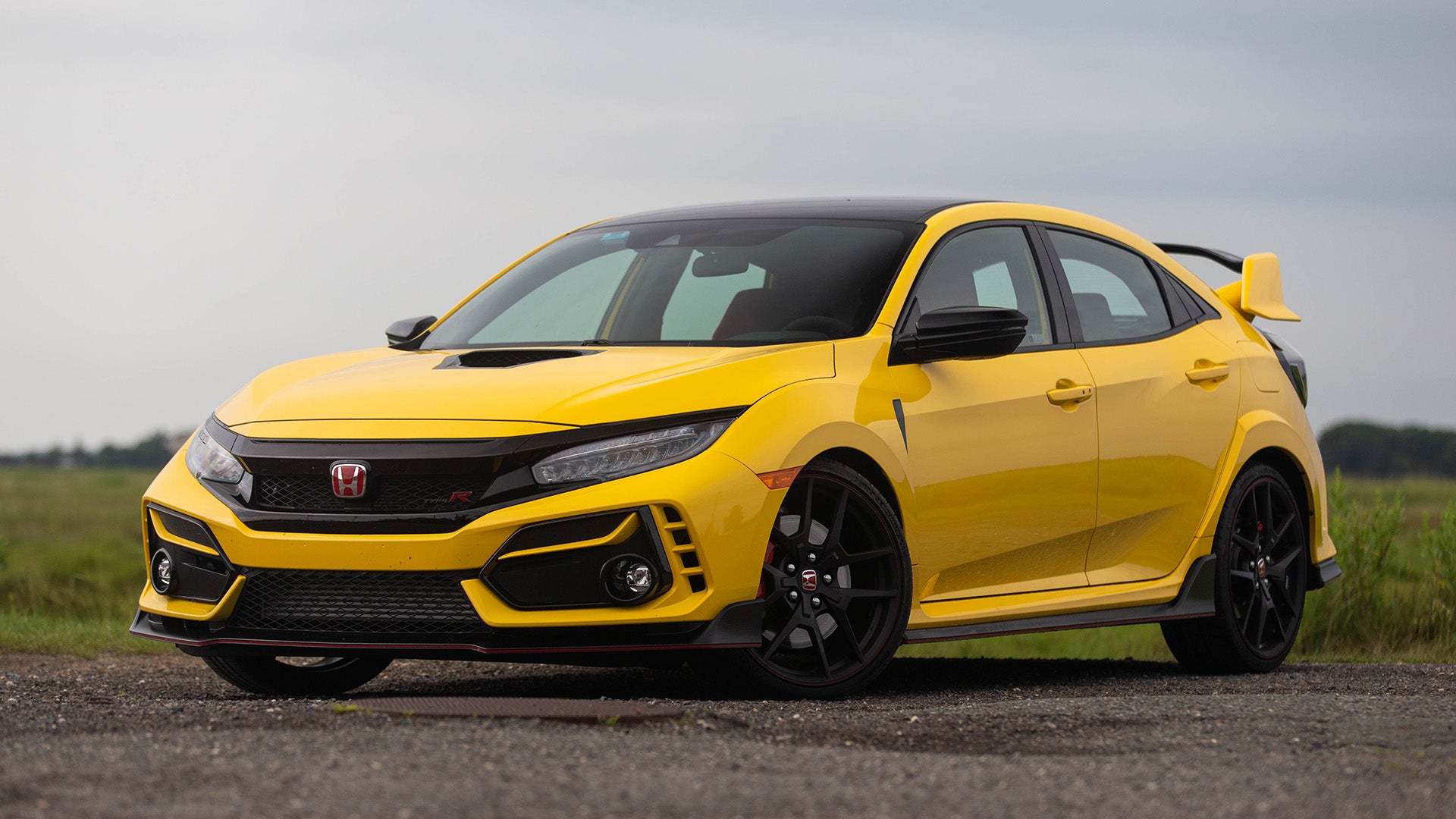 Upon first laying eyes on Phoenix (see also: Pikachu) yellow 2021 Honda Civic Type R Limited Edition, you can't help but laugh. It's winged, vented, and grilled in the most overwrought way possible, delivering a shock to the eyes much in the same way you'd imagine an electric mouse would. Looking at it, you simply cannot not have an opinion about it.

But isn't that the car's whole M.O.? Honda took arguably the most polarizing Civic design in the model's 10-generation history, did its hot hatch thing, and brought it stateside for the first time in Civic Type R history. It was a splash that shook the enthusiast community to its core. And now, with the all-new Civic pouring over the horizon (and a new Type R to follow), it's time to start saying our farewells.

And what better way is there to look back at the Type R than with the Limited Edition? Honda could've phoned it in for the Type R's swan song with a unique paint color or some kind of appearance package. Instead, the Type R LE squeezes one last boost of performance from the tenth-generation Civic with forged aluminum wheels, sticky Pilot Sport Cup 2 tires, and a reprogrammed suspension. You've likely read enough reviews of the car by now to know those additions aren't about to change a basic fact: the Civic Type R is phenomenal to drive. But they do open a window onto how Honda sees the CTR in its lineup and what that consideration means for the next one.

When the Honda Civic Type R launched in the faraway time of 2017, it was hard to escape. The forbidden fruit was no longer forbidden and its flavors—front-wheel drive, a six-speed manual, 306 horsepower from a turbocharged 2.0-liter—were a most welcome taste to those who'd spent their youths thirsting for a chance behind the wheel of such a JDM icon. In short, people flipped out.

And the car didn't disappoint. There's always a chance an automaker will mess up, but Honda knew if the Civic Type R didn't stick the landing, it would have a riot on its hands. And despite not growing up with Civic Type R posters on my wall—I'm much more a fan of Porsche Caymans—the appeal isn't lost on me. The car is cool. There's no other word for it.

Immediately, its looks cleaved the fanbase in two, with one side absolutely hating the bold design and the other—where I find myself—appreciating its racy, cartoonish hyperbole. Wearing slashes for headlights, a puffed-out lower grille area like a bulldog's jowls, and a rear end that incorporates more conflicting shapes than Picasso's "Three Musicians," it's a hot JDM car that looks the part, too. What more could you want?

Three years later, Civic Type R Limited Edition was announced in February 2020. Honda will make only 600 of them and each will exclusively be painted in Phoenix Yellow. Mechanically, they're the same as the regular Type Rs, but will wear BBS forged aluminum wheels (these shave off 18 pounds of unsprung weight), have specially tuned dampers, revamped steering, and additional weight reduction via the removal of the rear heater ducts, the tonneau cover, and the rear wiper blade. There are also "reduced sound-deadening materials." All in all, this cuts down another 28 pounds for a total reduction of 46 pounds. Finally, each Limited Edition will bear a numbered serial plate.

I can tell you right now the weight savings, stickier tires, reworked dampers and lighter wheels amounted to basically no discernable difference to me on public roads during my weekend loan. Editor-in-Chief Kyle Cheromcha confirmed they do help on track—there, the Limited Edition moves with more of an agile violence compared to the normal Type R, with noticeably crisper turn-in, flatter cornering, and less chassis movement over curbing.

Stopping power is kicked up, too, though a lot of those improvements probably can be attributed to the new rubber. Everything-response is quickened and sharpened and more buttoned-down—not enough to really alter the experience, but enough to rocket the Type R Limited Edition to a front-wheel-drive record 2:23.993 lap on Japan's Suzuka Circuit. That's quicker than a Ferrari F40. (Admittedly, the course's curve-heavy layout also plays a role in this particular accolade.)

Through town, despite being just a hair stiffer in Comfort mode, the car is still a Civic Type R. Which is to say, of course, that it's great.

Getting into the Civic Type R means climbing into a heavily bolstered, red cloth seat I'm pretty sure was plucked straight from an intensive LAN party. It's far more comfortable than it looks, though.

Outward visibility is unbeatable owing to the wide windshield and low beltlines. So many modern sports cars are cocoons of blindspots, so the privilege of being able to see out of this car felt almost retro. (The wing doesn't inhibit rear visibility at all.) Fasten the matching red seatbelt across your chest like a beauty pageant slash, push the heavy clutch in, slide the short-throw aluminum shifter into first, and you're ready to go.

Despite what its rakish exterior suggests, the Civic Type R can, in fact, behave civilly. It starts up in Sport mode—you can almost imagine it wearing a knowing smile when you discover this—though, in this mode, it rides no harder than a regular sporty car. It hides its athleticism well, having none of the hyperactive hot hatch attitude of a Hyundai Veloster N—which, anecdotally, could explain why I see so many of these things living in New York City. Steering is tight, precise, and well-weighted: good for flicking the car into and out of turns without a loss in front-end communication.

But the good stuff can be found in +R mode.

Here, the steering sharpens up, the throttle becomes even more responsive, the suspension stiffens to the point of being painful, and everything just gets louder.

Power comes on at around 2,500 rpm and it isn't a wall of wham! boost like in other turbocharged cars. Instead, you roll onto a swell of it and ride it out until about 6,000 rpm. Streaking up the rev-range is great fun but most importantly, accessible. You don't need to take the Civic Type R to a big track like VIR to fully enjoy it. It's perfectly happy tackling a winding backroad because it's a car that understands straight-line speed ain't everything.

Transmission gates are beautifully defined and the shifter slots into them with a satisfyingly muted clunk. Few things bring as much pervasive joy as great mechanical shift-action; you'll find yourself knocking around the Civic Type R's gearbox for no reason other than hunting for that sweet hand candy.

Shed of its affable demeanor, the car becomes the perfect partner for backroad shenanigans. Everything you touch has a heft to it and that translates directly into a swell of confidence to push things harder and faster. You feel like you're really sinking your teeth into something solid here, something substantive that'll respond. But also not something that'll bite back. That part's important.

As an aside, the Cup 2 tires sniffed out every single pebble in their path and flung them gleefully into the wheel wells. It was like driving to a shower of applause.

All of these things combined make for a seriously fun street car that effortlessly doubles as a daily driver. The Type R's big trunk and roomy back seat can fit both stuff and people. Its gas mileage was agreeable and in Comfort mode, it's great for highway cruising.

The only—only!—criticism I can level at it is not even really the car's fault at all. It has to do with everyone else. Maybe it was a combination of the yellow paint and the giant wing, but the Type R attracted nearly every Street Racing Man (yes, they were all men) in my proximity like it was a magnet. It was amusing to watch the first couple of times but ultimately very exhausting. There I was, just trying to exist, while my orbit was peppered with people trying to race. Unfortunately, I think this is just part of Type R ownership.

I won't get too choked up over the departure of this Type R simply because I can't. Not when I know there will be another one coming, one built on the objectively good bones of the upcoming, 11th-gen Civic. And those of you screeching about the Type R's looks will be mollified because that Civic is way more restrained in the styling department, giving the next Type R something far saner to work off of.

No, what I am is wary. Nearly every subsequent generation of a car has become bigger, heavier, more complicated. The Civic Type R as it is right now is very nearly perfect. And so while I have enough faith in Honda and the JDM gods that the next Type R almost certainly won't be a flop, I also wonder if it'll retain the old magic that this one does.

Happily, we're headed into what seems like a JDM revival, with recent news about the new Toyota GR 86, Nissan Z, and the return of the Acura Integra cleansing our feeds. But when it finally appears, the new Civic Type R won't find itself in the same world the old one did. The old one surfed in on a wave of combined nostalgia and triumph that we were finally getting something we've always wanted. It helped that the car was already good, but I'm also not ignorant enough to recognize that pure anticipation worked in the current Type R's favor. That is no longer the case for the upcoming Type R.

Because this is how the enthusiast community works. We got our forbidden fruit. We had a few years to get acquainted with it. And we're going to benchmark the hell out of the successor against the predecessor as soon as we can. If it's worse in any way we'll all be Very Big Mad about it. RIP to that car's forum threads and comments sections. Plus, this will all be on top of how well the new car stacks up against the other JDM warriors, too. So there's some pressure.

In 2017, the current Honda Civic Type R entered a market that demanded it. Four years later, it leaves one that's far more saturated and keener-eyed now that the hype is over and the dust has settled. However the new car ends up being, it'll have a high bar to clear no matter what.

Real talk, though? It's such a good problem to have. Well, good for us. Maybe not so good for Honda.