Home
News
Bow Before the Audi RS7, the Brand’s Rippled Adonis
Scroll Down To Discover
News

Bow Before the Audi RS7, the Brand’s Rippled Adonis

If you can’t afford one, consider storming the temple. 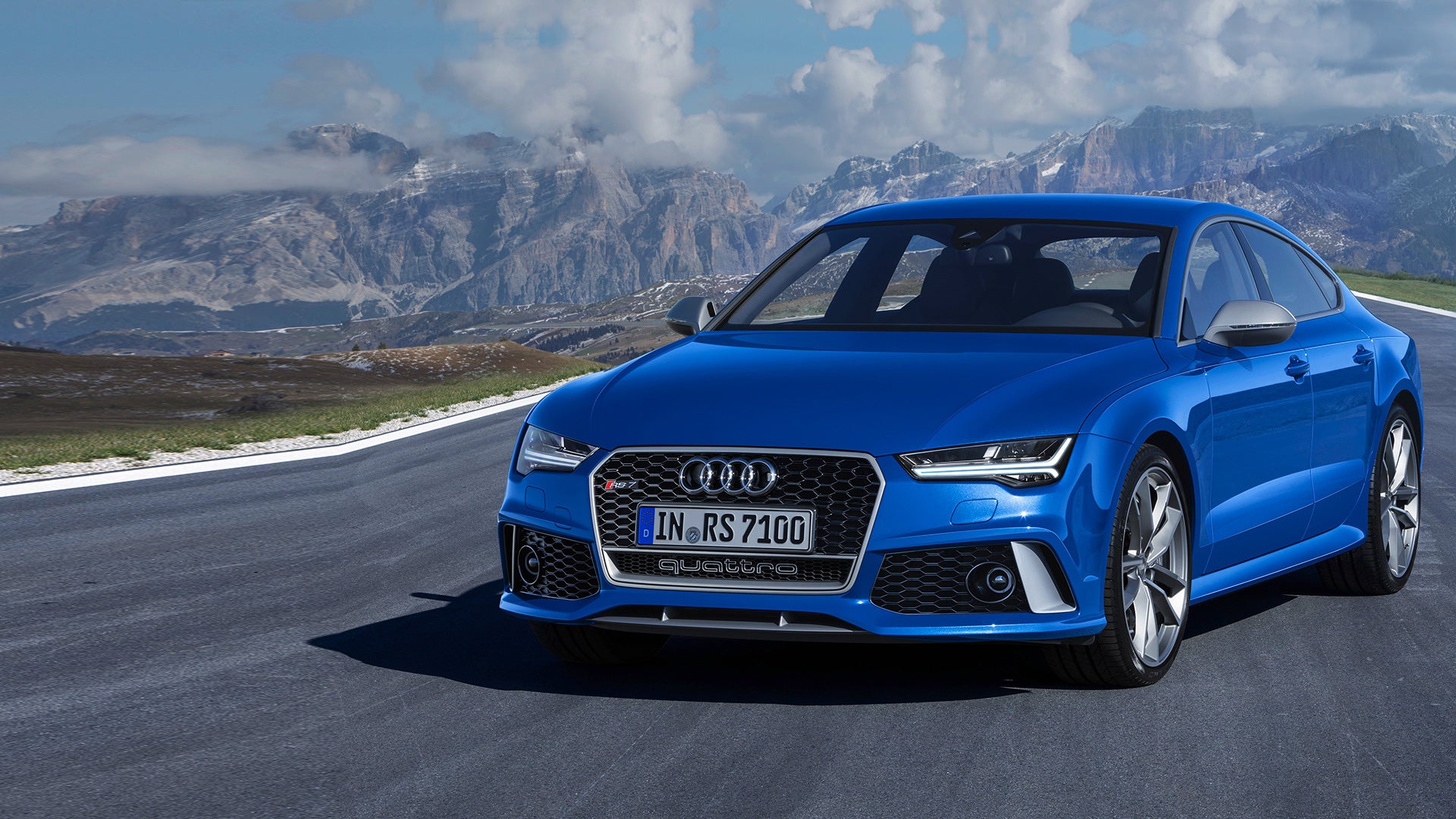 Remember when Audis were basically Volkswagens with a nice set of Lederhosen? A prospect would size up, say, an Audi 80, and wonder if it was really worth that much more money over a VW Passat. Often enough, the answer was "no."

Now we have Audis like the RS7 Performance, which demand a more modern calculus. At $129,900 to start, this ultimate, 605-horsepower RS7 nearly doubles the price of a standard A7. It’s also 20 grand beyond the 560-horsepower RS7. Some Audi fans would call that outrageous, and they’d be right. But an RS7 buyer can likewise turn the VW-family comparison around and point instead to the Bentley Continental GT V8 S: that car has 84 fewer horsepower that the Audi, despite starting with the same 4.0-liter twin-turbo V8 and Quattro AWD system. The Conti is less technically advanced than the RS7, as it doesn't come with the Audi's snazzy MMI infotainment system and semi-autonomous driving functions. The nearly 5,200-pound Bentley weighs about 700 pounds more, and the Audi's performance will kick its British ass into the next empire.

Yet the Bentley, at $213,000 to start, costs $83,000 more than its corporate cousin. Sure, the Continental gets the bespoke handmade-job inside, but the Audi’s cabin is no slouch either, gloriously bedecked in aluminum, carbon fiber, and hex-patterned leather sport seats. (It has to be the most inspired use of silver-and-black since the Oakland Raiders). All told, the Audi can lay reasonable claim to being a relative performance bargain—at least for people in the swanky strata that includes the Mercedes-Benz CLS 63 AMG and BMW 6-Series Gran Coupe.

Like the similarly square-jawed and sleekly coiffed George Clooney, the A7’s look has aged remarkably well, showing no signs of falling into B-list status. The RS7’s dark, glowering additions up the ante, including striking titanium-finished, scythe-spoked 21-inch wheels. These big arch-stuffers delivered a somewhat stiff-legged ride on New York streets, but apparently that’s the price of style. Where the style demands no penalty, though, is in rear headroom and generous hatchback cargo space. Whether it's an A7, S7 or RS7, that’s still an Audi signature versus Mercedes’ and BMW’s less-spacious rivals—or, for that matter, the Bentley and Aston Martin DB9.

Like its partner in high-dollar crime, the S8 Plus flagship sedan, the RS7’s acceleration is indescribably ridiculous. The (merely) 560 horsepower RS7 has been clocked to 60 mph in 3.4 seconds. So, with a 45-hp bump over the basic RS7, the Performance model seems a lock for a 3.3-second excursion. That’s quicker than a whole range of diminutive sports cars, including the Porsche 911 GTS, Corvette Stingray, and Jaguar F-Type R. Even three-seconds-to-60 supercars like the McLaren 570S or Mercedes AMG GT S had best beware; blow the launch in those rear-drivers and you might be spouting lame excuses when the big Audi hurtles past.

There’s no automated launch control, because the Audi’s gargantuan force demanded a conventional ZF eight-speed automatic rather than Audi’s seven-speed dual-clutch transmission. But you won’t miss it. Just goose the revs to around 1,500 rpm, ease off the brake, and enjoy a real-time physics lesson that would make Isaac Newton hurl.

When you've had enough straight-line excitement, the Audi also handles, feeling downright playful for a car that approaches 4,500 pounds. The RS7 went full firecracker on a multi-mile descent on New York’s Taconic Parkway, taking a confident set and slaying traffic like the autobahn assassin it is. Quattro all-wheel-drive and a rear sports differential quell wheelspin and lay down all the power you can handle, including the 518 pound-feet of torque, which rises to 553 pound-feet for short bursts of overboost.

Those bursts are accompanied by a rich, burly V8 soundtrack. Lift off throttle at key moments and you’re rewarded with lovely and impolite hydrocarbon belches and backfires—nothing so obnoxious that the Audi should excuse itself. The Audi’s steering does remain a bit isolating on occasion, its transmission a bit unhurried. But while the velocity suggests otherwise this is still a big Deutsche sedan, and all-day comfort remains inseparable from its mission.

Flailing (and mostly failing) to find something to complain about, I settled on the front doors. The portals have annoyingly vague detents to hold them steady unless they’re swung fully open, at which point the long, weighty appendages threaten to ding other cars, fire hydrants, and passing pedestrians. Even when I parked at curbs with the merest hint of incline, the driver door would swing itself shut from the midpoint of its arc. For owners, a pinched hand or bruised shin seems inevitable on the day you’re not paying attention. Even here, there’s consolation, with standard electric closers to cinch the doors fully shut.

Ah, wait, there is one serious blemish: If the Audi thinks like a supercar, it drinks like one as well. The feds credit the RS7 with 15/25 mpg, a joke worthy of Louis C.K. Serial romping showed me just 11 mpg, though the Audi did keep its pretty nose around 20 mpg during rare moments of highway relaxation.

Sailor’s thirst aside, whoever’s lucky enough to own this Audi should be goddamn happy. If said owner still feels unfulfilled, either his medication or his outlook needs adjusting. I suggest a slap across his entitled face, whether fashionably stubbled or pasty-white from excess hours spent in corner offices or operating rooms.

For us middling classes, let the RS7 be an aspirational peak, its terrible might almost too much to behold. Audi’s rippled Adonis, with beauty, muscle, wisdom and athleticism—and for the final insult, practicality to boot. So many Olympian gifts, bestowed on a single earthbound sedan. It hardly seems fair.