I’m turning this UTV into a long-range exploration vehicle to take my family on off-road adventures. 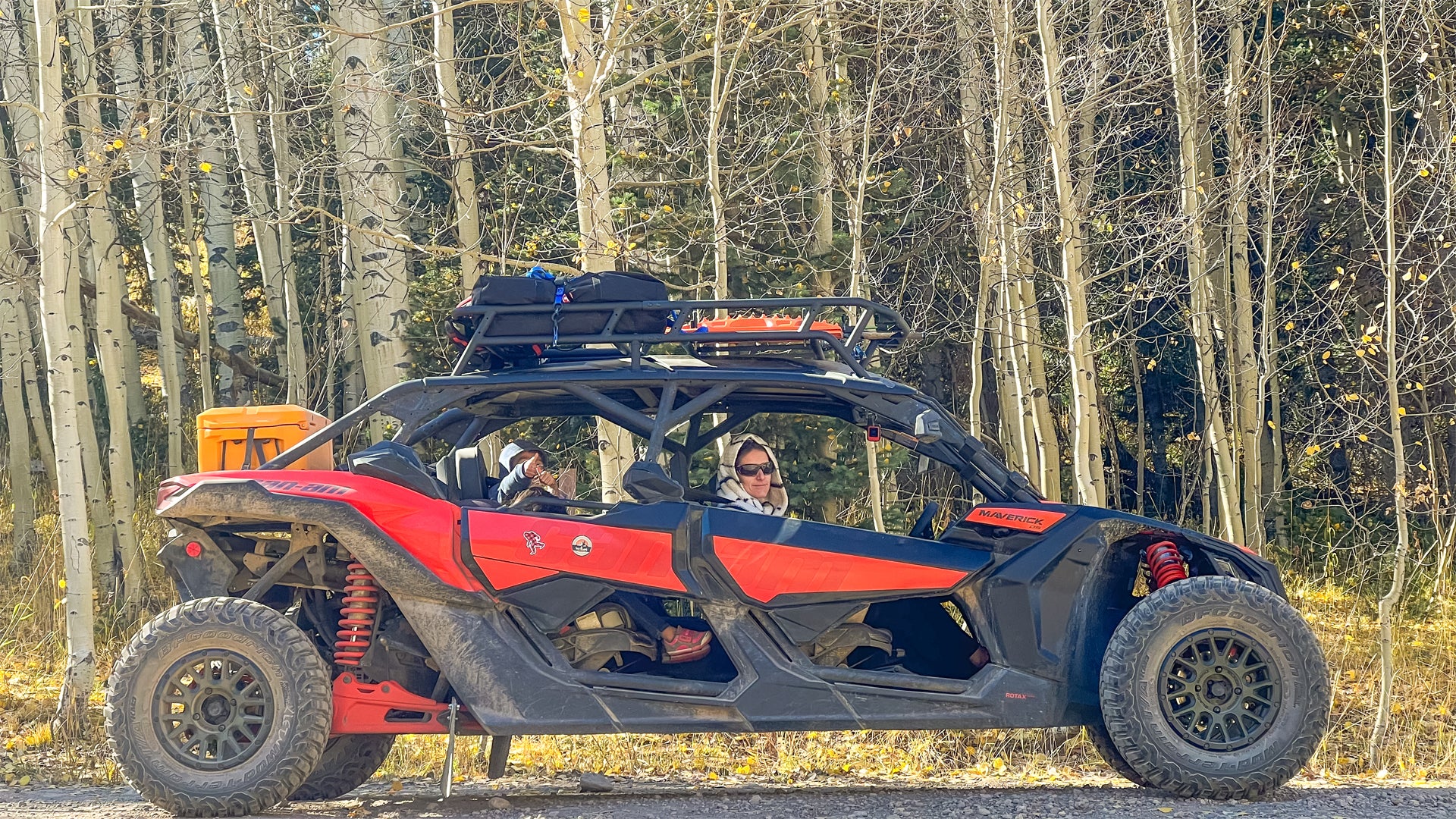 © A Roof Rack and Servicing Did a Lot for My Can-Am Maverick Overlander Project
Share This
Article:
Font size:
Write a Comment Report
Print

It feels like forever since my last update on my project Can-Am Maverick X3 Max UTV, and boy, things have escalated quickly. What started off as my family’s rugged, but basic, access to the great outdoors, has quickly spiraled into a full-on build.

I may have intonated that was the plan, but I didn’t think it would spiral so quickly. In the intervening months, we’ve not only brushed past the Can-Am Maverick X3 Max’s first 1,000 miles but it’s taken real steps in fixing nagging issues. I’ve also made it even more livable than just installing a roof and taken giant leaps toward becoming the overlanding machine I envisioned.

What have I done, exactly? The better question is “What haven’t I?”

The most mundane ownership detail was we clipped 1,100 miles on the odometer. Per Can-Am’s service schedule, it was due for its second major service with the first being its 250-mile break-in service. This included a full fluid flush, zerk fitting greasing, inspections of the major mechanical components, as well as electrical, and new filters for the air box and the CVT intake. The whole thing cost $529, but most of that is for labor.

I took it to Weller Recreation, which is where we purchased the Can-Am and the dealership did the work over a weekend and had it ready for pickup Monday afternoon. It was simple, easy, and expensive. Granted, time is money, money is power, power is pizza, pizza is knowledge, and I don’t have much experience in servicing UTVs. But given how easy a few other jobs have been, I may try my hand at rejuvenating the Can-Am at its next service point.

I mean, how hard could it be?

One persistent issue we’ve faced is that the doors can begin to sag. Once that happens, they won’t latch properly unless you physically lift them so that the latch mechanism meets the welded frame latch. Though it’s happened to my side once, it’s been a persistent thorn in my wife’s side.

The last few times, we had some business at the dealership and they fixed it while we waited. But this was a few weeks prior to our scheduled maintenance and I wanted to learn how to fix it myself. For the first time in forever, I consulted a forum—I had forgotten how helpful these could actually be.

Apparently, saggy doors are a common issue among not just Can-Ams, but most side-by-sides. Because of the rough terrain, and how doors attach to the cage structures, the retaining bolts can literally shake themselves loose. That happens faster if you rest your arm on the door while off-roading, which Alli does.

Luckily, all you need to do is loosen the door’s two bolts, realign the door so that the latch mechanism hits the latch, retighten the bolts, and voila, door fixed. You best believe I made Alli come out to the garage and witness my brilliance. I’m sure she was mighty impressed…

As overlanding is the overall goal, the Can-Am has a big issue. Unlike most overlanding vehicles—your trucks and SUVs—the Can-Am doesn’t have a bed, a spacious interior, or strong enough roof to throw a couple of hundred pounds of gear into or onto to ensure your camping comfort.

I’ve explored a handful of options. We’ve used my Uswe Core 25 backpack locked between the front seats and packed with whatever we could fit in there, while my wife would also carry a pack between her legs. Both were less than desirable solutions.

Later, we added a Dometic 35-qt cooler. That helped with food and other items that didn’t mind chilling with two Rtic ice packs, but again, we didn’t gain much in the way of gear-carrying capability. We solved that with a Can-Am’s Adventure Roof Rack.

The four-piece structure came in a similarly large crate as the roof itself and went together fairly easily. The kit doesn’t come with physical instructions, instead opting for more environmentally-friendly online ones. I was able to put it together in under an hour, though that included using two ratchet straps as a vice to mate the two main pieces together. A rubber mallet also helped. For what it’s worth, I’d rather have a tight connection than one that rattled itself apart.

One issue was immediately apparent and that was with the rack’s aluminum side panels. These are designed for further gear attachments, which our old friend Ken Block uses to carry an axe, jerry can, and chainsaw. During my initial test drive, however, it became very apparent that they need some sort of rubber gasket to quell their metal-on-metal reverberations. Hello, winter project.

The roof rack now regularly carries my Uswe, our two Maxtrax Minis, a set of fishing poles attached with some reusable Velcro straps, and all our camping equipment without issue. I’ve also been looking into other rotomolded boxes, like Front Runner’s Wolf Pack storage boxes, Overland Vehicle Systems’ 117-qt Storage Case, Roam Adventure Co.’s The Rugged Case, or Eylar’s SR-110 Overland Cargo Case. Any of these would keep our gear safe, secure, and away from the elements.

Out in the wild. Jonathon Klein

The next update is written and ready to go and it represents a massive step forward in the Can-Am’s capability. Still, I need to first recognize three unsung heroes: my Ryobi impact driver, my trusty 15-year-old Craftsman mechanics set (similar to this set), and a new impact socket set from Amazon’s Denali brand. These tools have been absolutely unmatched in their ability to pull the Can-Am apart and put it back together. Without them, I probably would’ve sworn and bled a lot more than I did.

What’s next are three modifications I can’t wait to tell you about: a Yoshimura exhaust, new rims from Black Rhino, and wheels from BFGoodrich. You’ll have to wait a little longer before I regale you with that, but not super long.

I’m sure a few more mods will come along during the interim, but I promise to be more regular in my updates going forward. We’ve had a lot of fun with this machine and I want you all to experience that with me. Until then, what do you all think of the build so far? Anything I need to do? Should I drop $3,500 for a long travel kit from SuperATV? Sound off in the comments below.