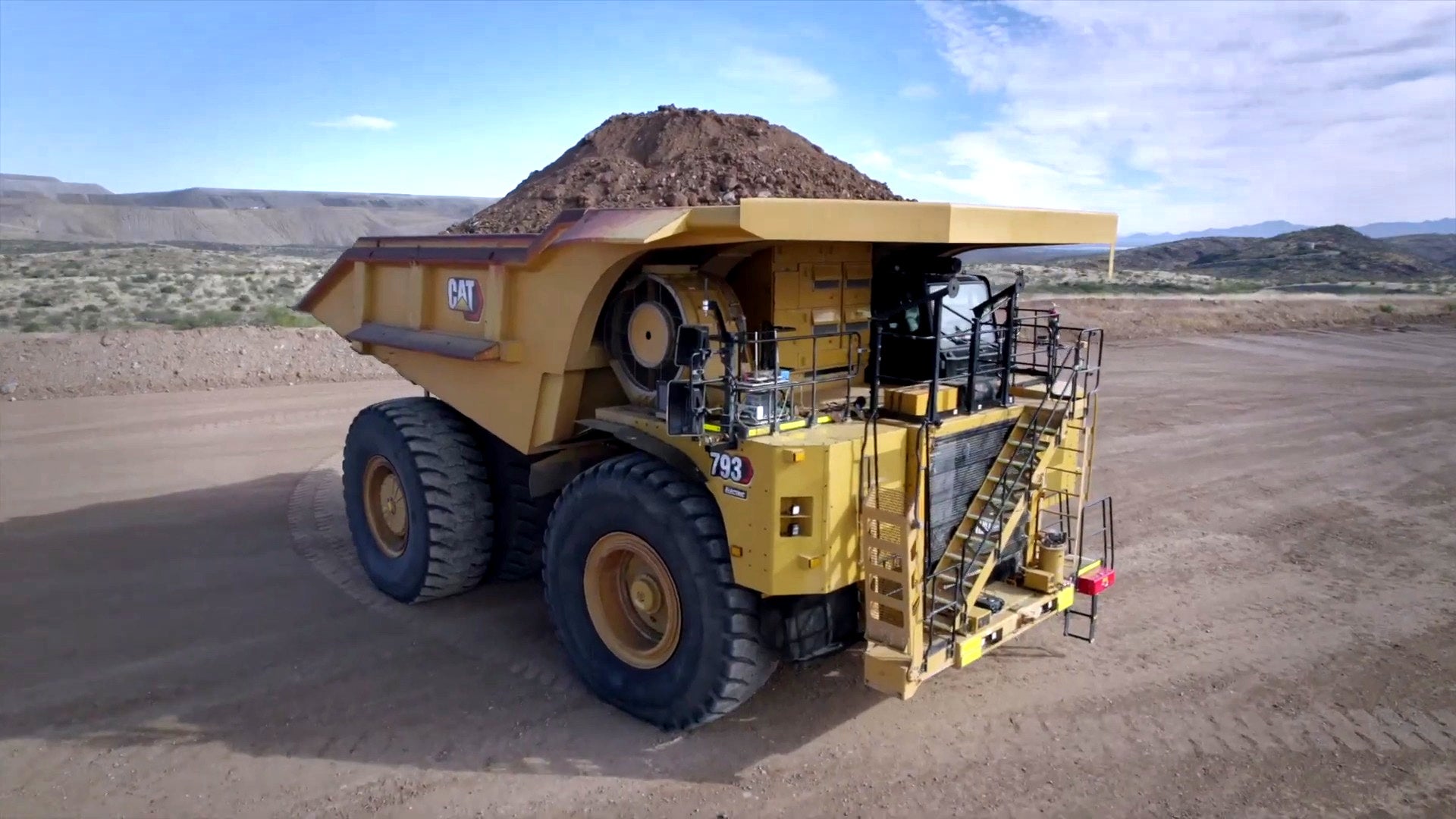 The Caterpillar 793 is a large mining dump truck with a battery-electric powertrain. It was developed in partnership with mining companies as part of Caterpillar's Early Learner program, including big names like Rio Tinto, BHP, and Newmont Corporation.

The 793 truck was demonstrated on a 4.3-mile test course. The truck was able to achieve a top speed of 37.3 mph (60 km/h) while fully loaded. A further test involved the loaded truck climbing a 10% grade for 0.62 miles at 7.5 mph. The truck then turned around for the descent, using regenerative braking to put energy back into the battery on the way down. After the run, the truck maintained enough battery capacity to undertake further cycles on the course, according to Caterpillar. However, the manufacturer didn't elaborate on how long the truck can effectively haul loads in a mining context.

Caterpillar is also developing renewable energy sources at its own Tucson Proving Ground. Traditionally, the facility has run on diesel generators as it's not connected to the local power grid. The intention is to run the same energy solutions at the proving ground as mining companies will use at their own sites. This is intended to help Caterpillar identify what it takes to run a mining site on renewable energy, and guide its customers through the process in future. Recent years have seen Caterpillar add 750 kW of solar panels to help power the site, with plans to expand to 2 MW in future. Further installations will add 3 MW of wind generation, 18 MWh of battery storage, and hydrogen storage and fuel cell facilities.

Battery electric trucks do promise to bring real benefits to mine sites. Most obviously, they will reduce the use of diesel fuels and will cut pollution if they are charged from clean, renewable sources of energy.

However, they also promise other efficiency gains, too. Regenerative braking promises to let trucks capture energy when they drive downhill. That energy can then be used to power the truck on its next climb. In cases where the truck must carry a heavy load downhill, it can then potentially even dump the load, and return uphill solely on the potential energy it captured on the way down. It's not the case at every mine site, but it can work in some unique instances. The Komatsu e-Dumper has been demonstrated to operate in this fashion.

Caterpillar has now demonstrated that it has a working battery-electric mining truck. It's early days yet for the technology, though. Vital statistics like payload, or the effective range or hours of operation, aren't yet available for the prototype truck. Of course, it's difficult to specify these numbers, regardless, as the elevation and route used in a given mine will have a big effect on the truck's energy use and endurance. In any case, mining customers will expect a lot from battery-electric trucks if they are to displace the hard-working diesel mining trucks in use today.