Tesla warned its testers that the car could do “the wrong thing at the worst time.” Videos show the car swerving in traffic and stopping mid-turn. 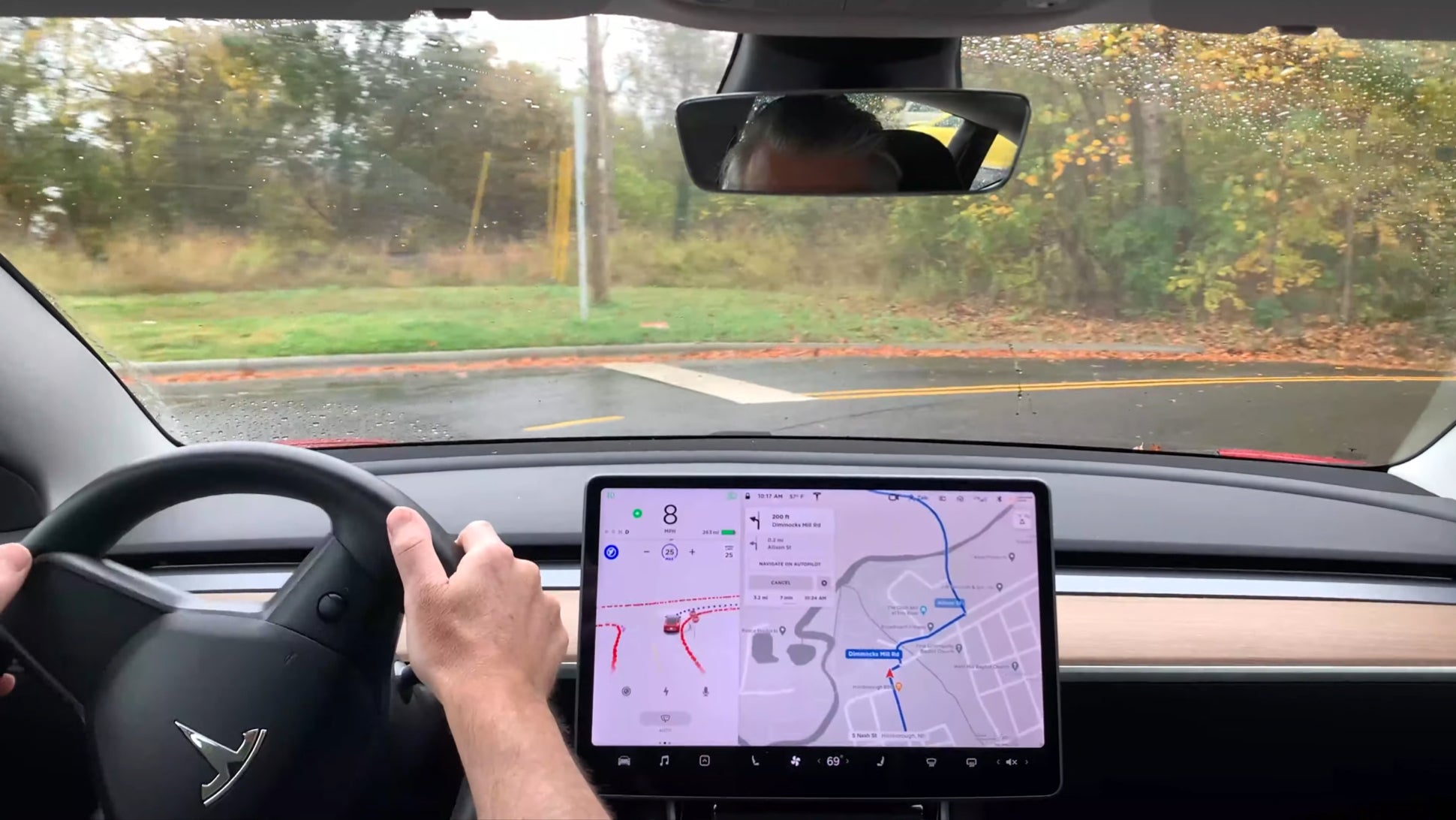 Another day, another reminder that no one actually has a self-driving car, regardless of the misleading names used for some advanced driver assistance systems. Tesla rolled out its "Full Self-Driving" package last week in a limited-access beta test with a warning that the system can do "the wrong thing at the worst time," and so far, that warning is proving a bit prophetic.

Videos of the feature in use have shown how we're all unwittingly part of Tesla's beta test—not just the drivers who opted in. The most concerning video from owner Omar Qazi shows the Tesla running the Full Self-Driving beta swerving wildly in traffic, the clip of which was reposted by Tesla critic Greta Musk:

Another video clip posted by Tesla critic TESLAcharts shows a car running the Full Self-Driving beta stopping abruptly in a turn lane before proceeding, at which point it nearly hits a median:

Oliver Cameron, who serves as the CEO of autonomous driving tech company Voyage, posted a Twitter thread dissecting video of the Full Self-Driving system's flubs. In one video, the Tesla nearly drove into oncoming traffic when it misjudged which side of a median it should go.

It also misjudged a one-way road as a two-way road, preventing a lane change to the left.

Another video shows the Full Self-Driving system missing a turn in a construction zone:

The system nearly hits a sign and also tries to proceed into an intersection despite the presence of an oncoming car:

It isn't just Tesla's most vocal critics who have noted issues with the system. Tesla driver Zeb Hallock posted video of a drive in wet North Carolina weather. His Tesla stopped mid-corner a couple times, stopped too far back in one turn lane, mostly used the left blinker regardless of which direction it turned, went a little bit over the speed limit once and sometimes got confused about which lane it should be in.

This is, after all, what a beta test is for: To find problems with a new system before it's released to the general public. To be fair, most of the car's performance on North Carolina's wet, sometimes bumpy and occasionally narrow roads was pretty impressive. Aside from the blinker issue, it even seemed to fare okay through a roundabout. Another video posted by Cameron also shows the system successfully navigating around a car that was partially parked in the road:

Yet if there's one thing these videos have shown, it's that drivers should use this system like Hallock: with your full attention on the road, your hands always on the wheel and exercising an appropriate amount of skepticism as to whether the car can handle sometimes confusing situations on the roads. Hallock also hits "report" when the car does something wrong, which is key to communicating these issues back to Tesla.

The National Highway Traffic Safety Administration has previously said that they are monitoring the new Full Self-Driving system and will step in if they believe it presents an unacceptable safety risk. The agency stressed that failing to adequately monitor the Full Self-Driving system will be considered distracted driving at a minimum, and it's the driver—not Tesla—who would get in trouble accordingly.

The Drive attempted to reach out to Tesla about the Full Self-Driving system's behavior in these vehicles and when they expect to push out fixes for user-reported issues, but due to Tesla dissolving its PR department, we don't expect to get a response.