Home
Car Reviews
The 2023 Cadillac Lyriq EV: The Start of Something Great
Scroll Down To Discover
Car Reviews

The 2023 Cadillac Lyriq EV: The Start of Something Great

Cadillac’s electric SUV is the distinctive luxury car we’ve been waiting 50 years for it to build. 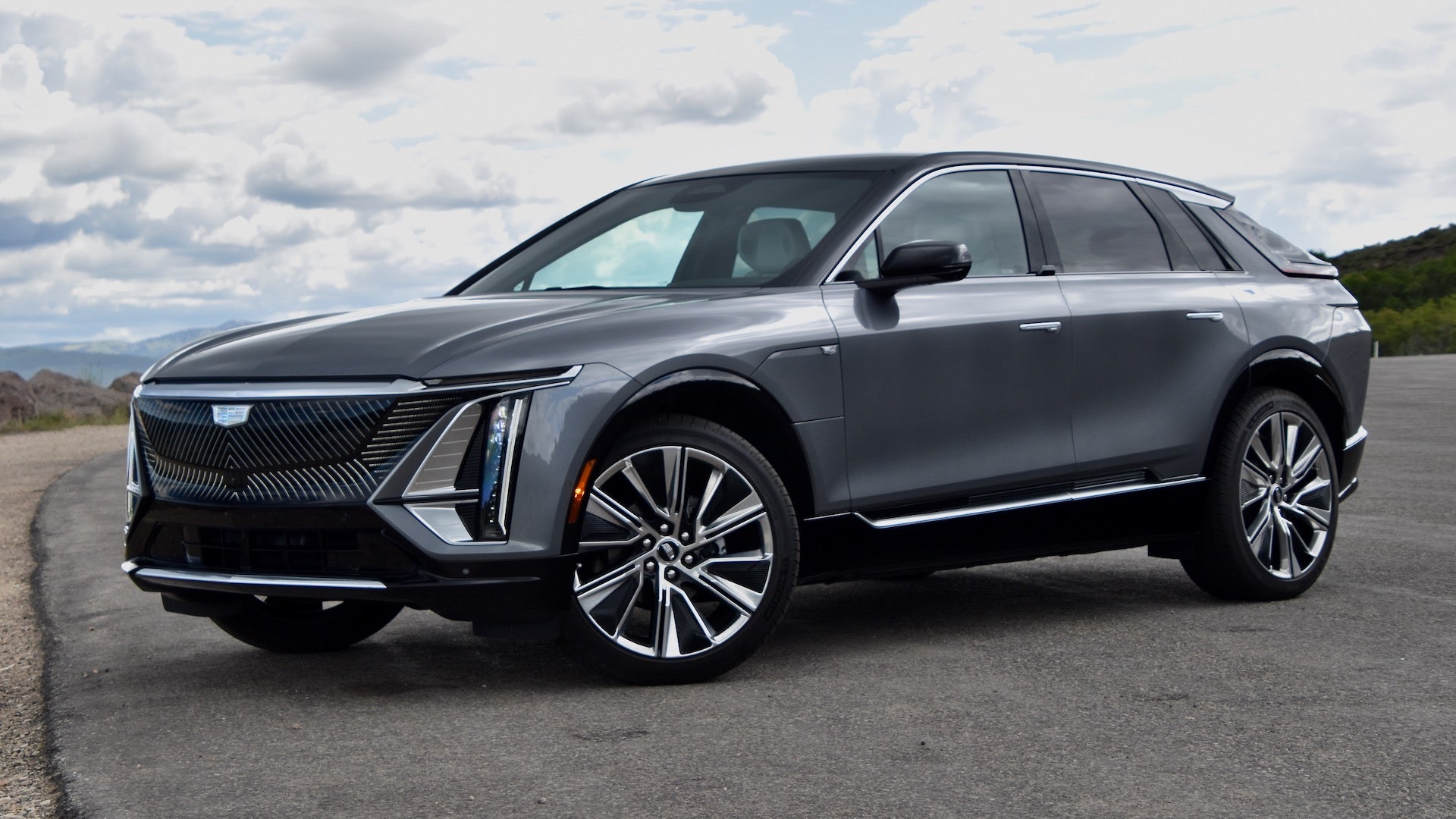 © The 2023 Cadillac Lyriq EV: The Start of Something Great
Share This
Article:
Font size:
Write a Comment Report
Print

Cadillac’s track record of disappointing customers and fans dates back decades. Once the self-proclaimed “standard of the world,” General Motors’ luxury division has undergone too many underwhelming permutations to count, and its future now hinges on whether it adapts to the age of electric vehicles. Its first EV, then—the 2023 Cadillac Lyriq—tells us whether the brand is adapting or heading for extinction like Holden, Oldsmobile, Pontiac, and Saturn before it.

Rather than just survive, though, Cadillac looks set to thrive if the Lyriq is anything to go by. Caddy's first EV is a serious, distinctive luxury crossover, standing above the nearest contenders with a spacious, comfortable interior, a competitive driving range, and industry-leading hands-free driving technology to come later on. Best of all, it’s wrapped up in the kind of tasteful grandeur that we all thought belonged only to Cadillacs of the past.

To be fair, it hasn’t gone off completely without a hitch. Some of the onboard tech either wasn’t implemented yet or was glitchy, there may still be some interior kinks to work out, and I don’t like the car’s rear. Still, considering how much of a step up from recent Cadillacs the Lyriq represents in terms of design, it’s a strong showing for a first EV that makes me think Cadillac might really be back.

Why the Lyriq Matters

Being Cadillac’s first EV is only one of the reasons why the Lyriq is significant. It marks a return to serving up real nameplates rather than spoonfuls of alphabet soup. It’s emblematic of the company’s intent to be a global superlative—”Be Iconic” is Cadillac’s new tagline. It’s also a preview of what to expect of the Celestiq, the six-figure, super-luxury sedan to confront the likes of Maybach and Rolls-Royce.

But first, the Lyriq itself. It’s a midsize luxury crossover (so, the size of a BMW X5), built on GM’s Ultium EV platform like the larger GMC Hummer EV. Its floor houses a 102-kWh battery powering a single motor on the rear axle, generating up to 340 horsepower and 325 pound-feet of torque or eking out an EPA-estimated 312 miles of range. All 5,610 pounds of Lyriq is sprung on five-link suspension with “frequency-dependent dampers” rather than GM’s superb Magneride—a potentially compromising omission. This car needs to bring GM’s best on all fronts if it’s to prove Cadillac can compete in (much less lead) the EV space. Having been disappointed by the CT5-V though, I’d say Cadillac’s first order of business is stepping up its design game, which the Lyriq absolutely does.

The Cadillac of EVs

I laid eyes and hands on an early production Lyriq Debut Edition, the sold-out launch model. Let’s get my biggest gripe out of the way: I thought I was taking bad photos of its rear until I realized it wasn’t me, it was the car. The back is, like, a foot longer than it looks like it should be, which I know helps with aerodynamics, but it reminds me of the Pontiac Aztek. I wish the rear lights were taller to be congruent with the elements found on the Escalade. I wish it had fins.

Anyway, aside from that, hot damn is this SUV a looker. From a broad, opulent grille emanates the road presence of classic Cadillacs, as well as the stark white of its inlaid lighting elements. Its fastback-style roof is the only one I’ve ever seen work on a crossover, while its flush door handles aren’t those freezing-prone popout jobbies. Just press them, and they’ll pop the doors open to reveal an interior with a simple, ‘67 Coupe de Ville-inspired design.

It’s What’s Inside That Counts

The Lyriq is a spacious place, with significant headroom under its panoramic sunroof, tons of leg room, and plentiful storage. There’s space beneath the floating center console, two popout drawers under the dash, a subfloor area in the trunk, and even a clever “piggy bank” slot to stick seatbelt buckles when you fold the rear seats flat. GM locked one of the drawers in the test cars due to a bad damper, which they said made it clunk open, and the glove box can only be opened through the touchscreen. Both I consider goofs, the former of which should be watched for on production cars.

But it must be emphasized that this is an interior more than one rung above the CT5 or even the Escalade, and for a multitude of reasons. Cadillac’s refusal to use even a single preexisting GM component means the Lyriq feels unlike any GM product I have ever sat in. Black ash wood veneer contrasts a bounty of metal control surfaces, all textured—brushed, cast, or machined. The passenger-side vent looks like the grille of a ‘40s car, and I think that’s just fantastic.

By and large, my praise extends to the tech, too, despite my bias against touchscreens like the Lyriq’s 33-inch LCD unit. It’s also a part unique to the car, not an amalgam of off-the-shelf components. Integral Google Maps navigation shows your estimated remaining charge at your destination, while audio plays through a crisp AKG Studio 19-speaker sound setup with speakers in the headrests, standard on the Debut Edition. (Yes, it stood up to the toughest challenges our official stereo test playlist threw at it.)

Because it’s unsafe to corral all vehicle functions into a touchscreen, Cadillac tethered crucial controls like the HVAC and stereo volume to physical knobs and switches—those satisfying textured metal ones I won’t shut up about.

Super Cruise, GM’s marvelous hands-free highway driving assist, wasn’t included on the test vehicles, but it’ll be added to all 2023 Lyriqs via an over-the-air update this year. Speed limit recognition was absent, too, but I was told it’ll be included from day one, and that the test cars were running on outdated software. GM also blamed this for a string of strange dash malfunction alerts that popped up when it rained. None of this worried me because, again, these were early production vehicles and GM doesn’t have a record of, say, promising ADAS functions it can’t provide.

I only spent a few hours on the road in the Lyriq, but they were enough to show that its style is backed by substance. A Cadillac must first and foremost be comfortable and quiet, which the Lyriq is to surprising degrees. Advanced noise-canceling beyond my understanding kept the cabin particularly quiet for a huge SUV, and helped bring out the best of that AKG sound system. It rode so well that I never even gave any thought to the ride until hitting a particularly rough patch of pavement, and even then I wouldn’t say I missed Magneride. (I’m still curious how much better it’d be, though.)

Visibility was acceptable with no glaring blind spots, and the turning circle was reasonably tight, the electric power steering being almost feather-light most of the time. It’s one of the reasons I’d say the driving dynamics were on the bland side, this not being a V-Series Cadillac (yet). The acceleration is adequate but unexciting, as 5,610 pounds will always be a lot of weight to move, though it carried it well through corners. Traditional two-pedal and a well-executed one-pedal mode are both available, while a paddle on the wheel can crank regenerative braking up to the max regardless of mode.

It’s a competent EV, one that’s not exactly thrilling, but it doesn’t need to be because that isn’t the point. (Also, because it doesn’t have the seat bolstering for that.) An electric Cadillac is meant to be a pleasant cruiser with presence, and it’s definitely that. I quickly lost count of how many people stopped to stare at the Lyriq in a way they never would with any of its competitors.

The Lyriq is totally sold out for the 2023 model year, and Cadillac says the waitlist for 2024s is only getting longer. Cadillac hasn’t outlined what trims will be available after launch, but we know we’ll have a choice between what I tested out—a cheaper, long-range, rear-wheel-drive model—and a more powerful all-wheel-drive version for a small premium (coming 2023). The latter will be available with a trailering package capable of towing up to 3,500 pounds and is likely the basis of the tacitly confirmed Lyriq V performance model. There won’t be a three-row version, though.

All Lyriqs come standard with 20-inch wheels (upgradable to 22s on RWD models) and a selection of all-season tires. In addition to Super Cruise, they include a full suite of modern safety assists: forward collision warning, automatic emergency braking, and front pedestrian braking with bike recognition keep watch up front; blind zone and side cyclist warnings monitor the flanks, while rear park assist, cross-traffic braking, and reverse automatic braking keep an eye out back. There’s an automatic parking assist, an HD surround camera, and a teen driver mode, too. Those uncertain about charging will be comforted by the choice of either a $1,500 credit toward a home charger installation or two years’ free unlimited fast-charging with EVgo.

Midsize premium electric crossovers are few in number: The Genesis GV60 and Lexus RZ 450e are a size or two smaller, while the BMW iX is too pricey, and the Audi E-Tron too half-baked. That leaves only the Tesla Model Y as a real contender, and even that is a favorable comparison for the Cadillac. The Lyriq is cheaper in both drivetrain configurations, has superior driver-assistance tech, is altogether better designed inside and out, and has what I gather to be far superior build quality.

The Tesla on the other hand, while looking like a Model 3 playing chubby bunny, has a slightly better-advertised range, a superior charging network (at least for now), a more spacious interior, and an available third row, however small.

Ginormous EVs aren’t the CO2 emissions milestone they’re made out to be, and they worsen the problem of tire particulate emissions, an under-acknowledged source of pollution. Additionally, while GM boasts the Lyriq’s upholstery to be an animal-free leather alternative, a spokesperson admitted that it's just PVC—more cynical PR-speak for petroleum products. On the bright side, though, GM promises to follow in Polestar’s footsteps by releasing a CO2 emissions analysis for the Lyriq’s production. Even if its results are ugly, it’ll be major progress toward climate transparency from the automotive industry.

The 2023 Cadillac Lyriq is exactly what Cadillac needed: Proof that GM’s luxury division can really make a car that feels special again. The Lyriq embodies the best of GM’s modern EV and ADAS technology, all in a package that’s practical, comfortable, and above all stylish.

Roughly four hours spent with it reveal hardly any glaring issues; there’s only an ugly rear end, unremarkable driving dynamics, and some potential hardware and software wrinkles that are worth keeping an ear open for.

In all, though, the Lyriq is an astonishing step forward for GM’s luxury division after a half-century of languishing. It’s a testament to how seriously GM is taking Cadillac, one made all the more impressive by hitting a Tesla-beating $62,000 price point. If this is what Cadillac can do with its first mass-produced EV, then just imagine what the six-figure Celestiq has in store for us.