Home
News
Toyota GR Corolla Could Be Here in October, According To Leaked Dealer Docs
Scroll Down To Discover
News

Toyota GR Corolla Could Be Here in October, According To Leaked Dealer Docs

If the leaked document is legit, the GR Corolla could be just around the corner. 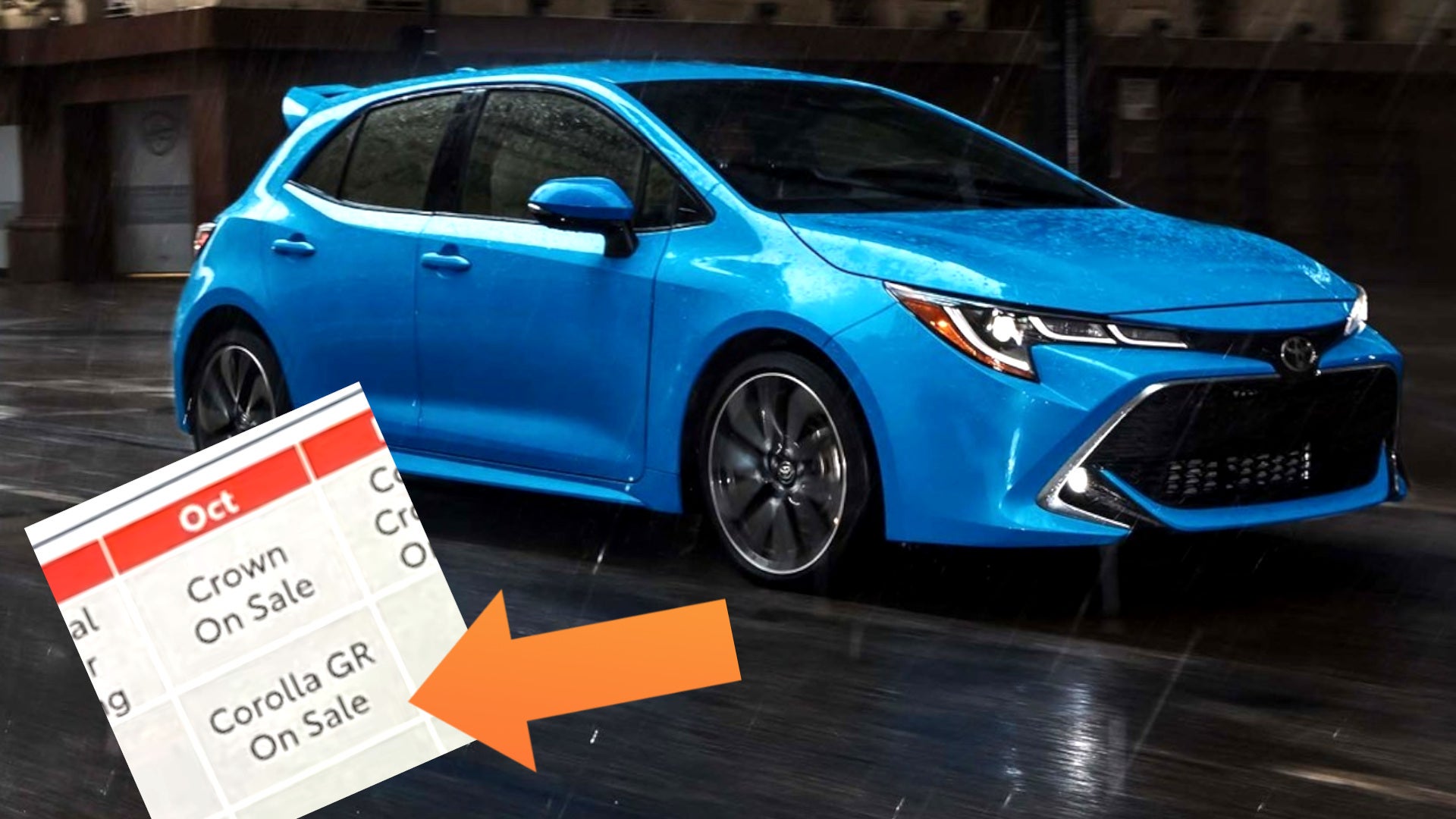 © Toyota GR Corolla Could Be Here in October, According To Leaked Dealer Docs
Share This
Article:
Font size:
Write a Comment Report
Print

The Toyota GR Yaris is prized as a turbo rally-bred weapon, but it's equally decried for not coming to the US. Since then, we've seen several hints and leaks suggesting that a GR Corolla is on the way, with a turbo engine, manual gearbox, and of course, all-wheel-drive.  Now, YouTuber Driven District has shared a video regarding what he says is an internal document from a Toyota dealership, indicating that the GR Corolla will hit the US market in October 2022.

At 1:20 in the video, Driven District shows a document entitled "2022 New York Region Priorities" that features a calendar of upcoming product releases and events for 2022.  Amidst other tidbits like a mention of the Toyota Crown being on sale, the calendar has "Corolla GR On Sale" listed for the month of October.

The flip side of the document shows the sales plan for 2022, indicating expected sales of 90 GR Corollas for the year. It's a low number, but an unsurprising one, given the likely limited numbers available and the fact that the launch is happening so late in the year.

The veracity of the document is not known; The Drive reached out to Toyota regarding the launch date for the GR Corolla, with the company declining to comment.

The video does provide a hint at where the leak may have come from. "Let me know if you're waiting on the GR Corolla. If you're interested in one, I do have someone close to me who works at a dealership," says Driven District. As for the document itself, he states "I'm not gonna say that's where I got this from, let's just say I walked into a dealership and saw it and took it, I dunno, who knows?"

Regardless, our host doesn't miss the chance to try and drum up some business for his partner. "My girlfriend does work at Toyota," he states, adding that "if you're in the tri-state area, you wanna get a Toyota, be sure to reach out to me. She'll get the best deal she can for you and everything." In any case, if your partner relies on a paycheck from an automaker, it's probably not a great move to leak internal company documents, whether you stole them or they provided them directly.

Anticipation for the GR Corolla remains high amongst enthusiasts, and with the strong passion shown for the GR Yaris, any US allocation could sell out quickly. Consider getting yourself on a wait list early if you simply have to have Toyota's next turbo hot hatch.