Home
News
2021 Ram TRX: The 702-HP, Hellcat-Powered Truck That’s Been Years in the Making
Scroll Down To Discover
News

It’s got active Bilstein shocks, 35-inch tires from the factory and, yes, a supercharged Hemi. 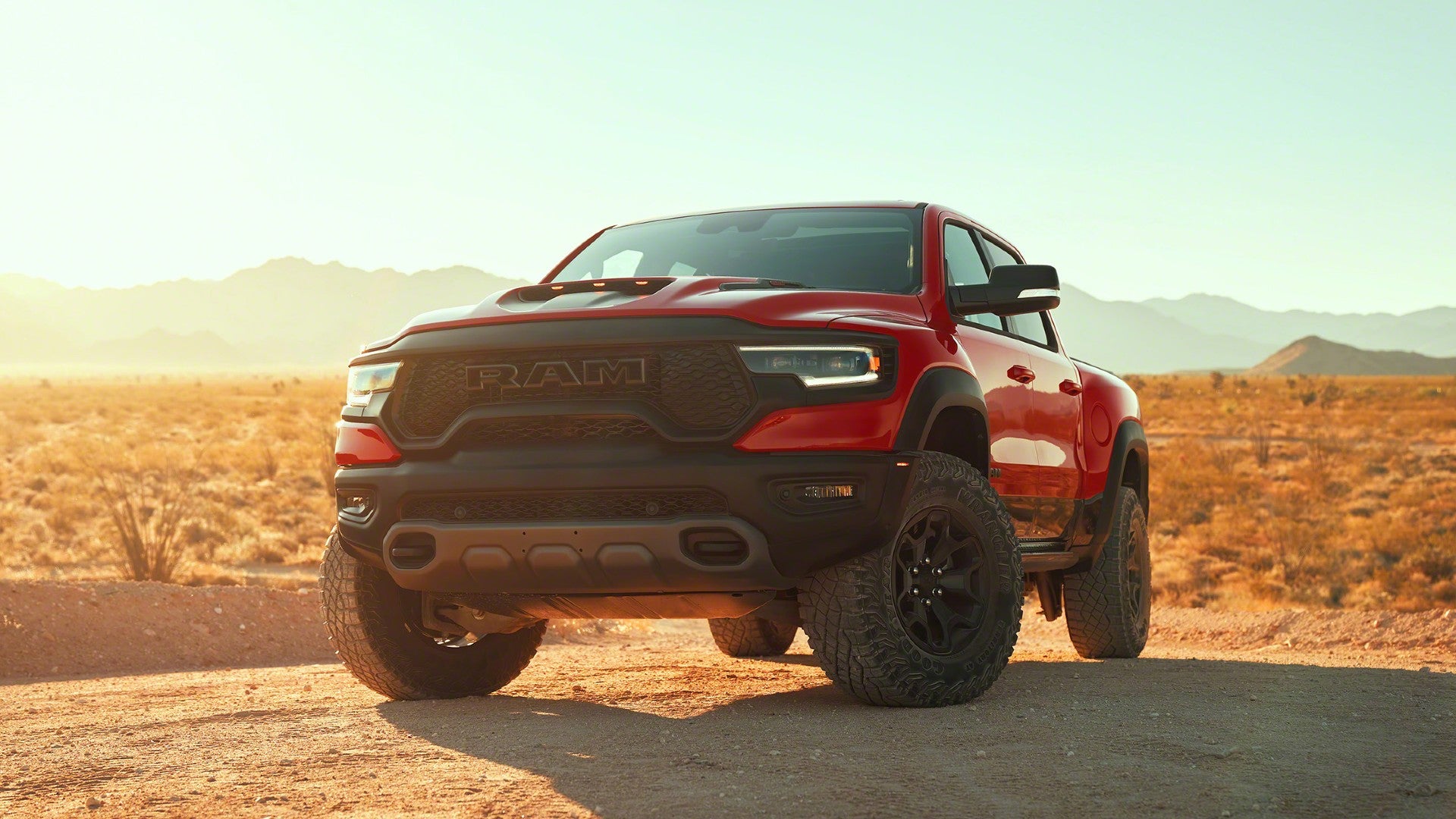 Ram isn't naive to its competition—it's only been taking its time. These last few years have signaled a change within the brand that rewards innovation and quality with sales success, enabling the company to build what its customers have long been asking for. That's the Ram TRX in a nutshell, and while it's chock-full of braggadocio, it's really a strategic approach to taking on Ford's F-150 Raptor. It isn't particularly stealthy, though, thanks in large part to a 702-horsepower supercharged Hemi.

Yes, that's the Hellcat engine. Having said that, Ram has avoided calling it a Hellcat everywhere. It doesn't use that name in the video reveal or the press release—my guess is it’s a branding thing. But it’s a 702-hp supercharged 6.2-liter V8 just the same, albeit tuned more for this sort of thing rather than outright top speed and so on.

There are a few key numbers to know about the TRX, the first of which is that mighty horsepower figure. The next is 650 pound-feet of torque, helping it turn 35-inch Goodyear tires with zero qualms. In fact, the three-plus-ton truck can sprint to 60 miles per hour in 4.5 seconds and run the quarter-mile in 12.9 seconds at 108 mph. Keep pushing and it'll make it to a tire-limited top speed of 118 mph, no matter the terrain.

Output is sent through a TorqueFlite 8HP95 eight-speed automatic transmission and then to a full-time active BorgWarner transfer case that's been strengthened to withstand the extra twist. It features a low-range ratio of 2.64:1 and can be flat-towed while in neutral—important for all you RVers. As for the TRX's work capabilities, it can tow up to 8,100 pounds and haul 1,310 pounds in the bed.

The latter seems paltry and, to tell the truth, it ain't great as the unibody Honda Ridgeline has max payload capacities ranging from 1,455 to 1,586 pounds. On the other hand, the Raptor only manages 1,142 to 1,366 pounds. But if you need the ultimate in towing, get a different truck. This thing's for off-road hoonage.

Goodyear made these Wrangler Territory rollers specifically for the TRX, and they're (almost) confined by the truck's composite fenders that stretch far and wide. Ram claims the TRX body is eight inches wider than the standard 1500 with a track that's six inches wider, giving it an inherently aggressive stance that's fitting to the truck's high-performance demeanor. Most important in this scenario, however, is the suspension.

Unlike the Ford Raptor or the Ram's dune-blasting Jeep Gladiator Mojave brethren, the TRX utilizes new 2.5-inch Bilstein Black Hawk e2 adaptive shocks rather than Fox Racing equipment. Bilstein designed these units to be highly efficient when it comes to body control and heat dissipation so they work as intended in all conditions. Dual Electronic Proportional Valves are always adjusting damping forces so the TRX reacts immediately to the road or trail. Importantly, Bilstein incorporated a Jounce Cut Off that allows for three zones of "progressive bottom-out control." Essentially, this works in tandem with a urethane bump stop to prevent the truck from washing out after big jumps.

All the while, five-link coil rear suspension provides much-improved articulation over a leaf spring setup. This is unique to the TRX and allows the Dana 60 rear end up to 13 inches of travel, or 40 percent more than a normal Ram half-ton. For what it's worth, the 2020 Ford Raptor still makes use of a leaf spring rear suspension, though several reports claim it's switching over to coils for its next generation.

Of course, these features are controllable through Ram's in-house-developed Active Terrain Dynamics suspension management system, which makes full use of the smart shocks to perform optimally on all surfaces, from sand to gravel, mud, snow and ice.

The Ram TRX has no problem driving through water either (apparently, we haven't tried it ourselves yet) as the design and engineering crews both targeted 32 inches of fording depth from the outset. Part of this can be attributed to the TRX's high-riding stance, though the tall-mounted hood intake is crucial. Dual filter elements keep particulates out of the engine, and Ram claims the intake is capable of trapping four times more dust than its competitors. It's also responsible for feeding air to the 2.9-liter supercharger.

Ram says the TRX draws in 50 percent of its air through its grille, which features pass-through RAM lettering, while the remaining 50 percent is sucked in via the functional hood scoop. Additionally, it makes use of the breeze that goes around the body by funneling it through air curtains on the outside of each headlight, sending it through the fender well to exit directly in front of the doors.

The driver can toggle through a long list of drive modes that are selectable on the Ram's Uconnect 4C infotainment system. Just like in other go-fast Fiat Chrysler offerings, there are Performance Pages along with new-for-TRX Off-Road Pages that display pitch, roll, ride height, transfer case position and more. These are projected on the 7-inch driver instrument display or the 12-inch vertical screen we've all come to love on the current-gen Rams, as is the 360-degree Surround View Camera system.

Plenty of amenities make their way over to the TRX's interior, which can be had in one of three specs: TR, TR1 and TR2. They're progressively more luxurious and expensive, though you do get what you pay for. Every interior package comes with a flat-bottomed leather steering wheel that can be optioned with suede or carbon fiber accents to match the plethora of red and black buttons and switches. In higher-spec'd models, you'll find an elaborate Heads Up Display (HUD) and even a digital rearview mirror that provides an unblocked view thanks to a camera that's mounted in the third brake light. The seats seem comfortable albeit highly bolstered for speedy blasts and on the back, there's tacti-cool Modular Lightweight Load-bearing Equipment (MOLLE) and a Pouch Attachment Ladder System (PALS).

Oh, and one last thing—the rotary dial shifter is gone in the TRX. Instead, Ram developed a console-mounted lever to control the eight-speed automatic, or drivers can shift using the flappy paddles on the steering wheel. It might not seem like much, but it's the little things.

Ram expects the TRX to hit showrooms before the end of 2020, and a base price of $69,950 has been set before the cost of delivery. Those who spring for top-shelf models—including the limited-run Launch Edition with special styling and interior appointments—will likely spend north of $80,000, though how high above that figure isn't really clear yet. That's a fair amount more than a Raptor but, then again, you also get 252 extra horsepower and 140 more pound-feet of torque. The call is yours, but it looks like Ram has made good on its promise of a world-beating performance truck.

Has a legit Raptor-fighter finally arrived? You be the judge.