The 2016 Cadillac CTS-V Begs the Question: Is More Always More? 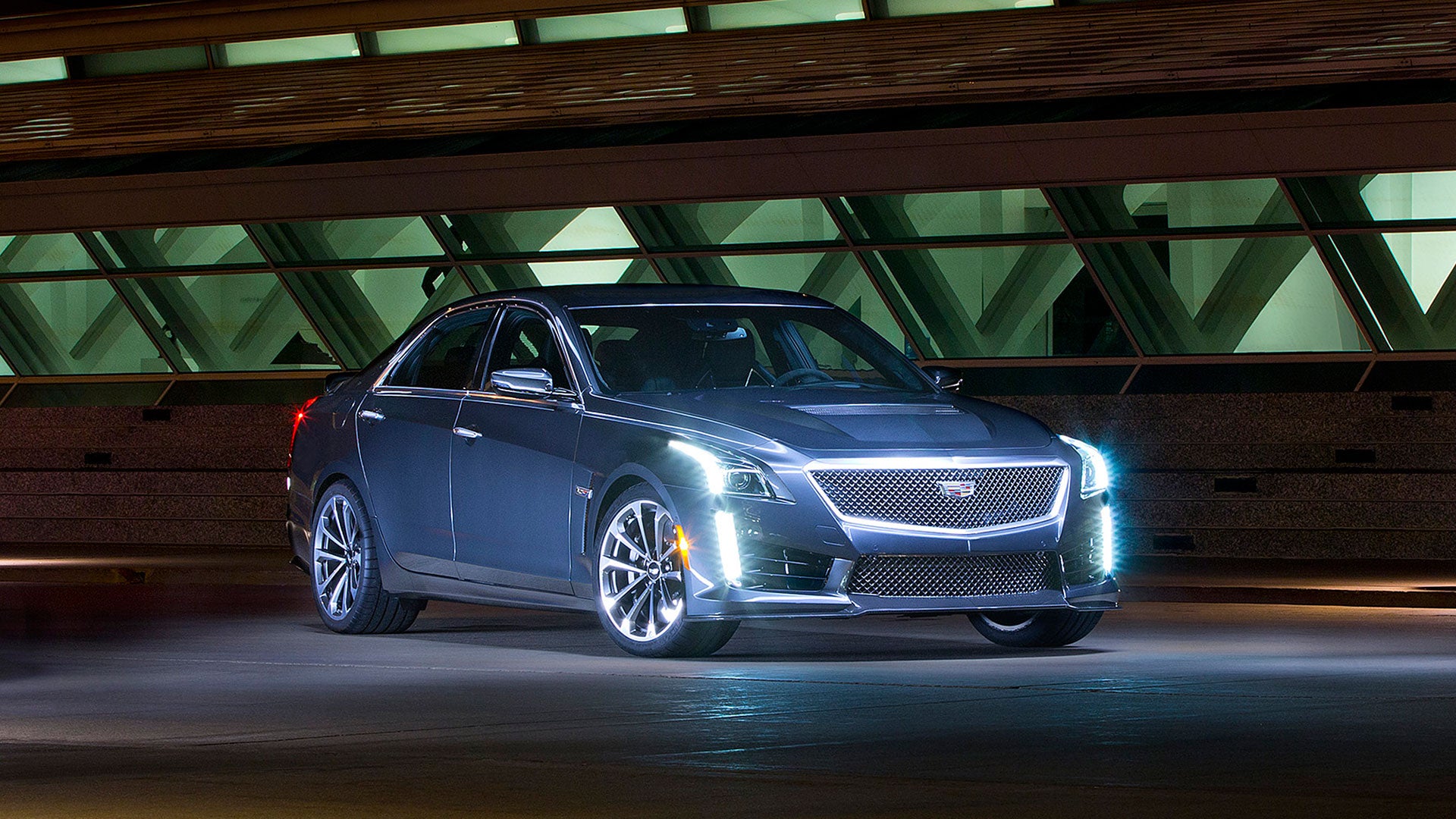 No one needs a 640-horsepower sport sedan. And the issue is not, as your Prius-pushing auntie insists, that there’s no place to go fast. There are many such places. Except for Florida.

The issue is that a modern, top-gunning sedan in the 400- to 500-horsepower range—let’s say the 420-horse Cadillac CTS Vsport—ends up going roughly as fast in those go-fast situations as its overweening analog. At that point, you stop focusing on a surfeit of power and start noticing little things that aren’t so little: design, seamless technology, luxury, efficiency. Don’t forget price.

For Cadillac, that analog is the CTS-V. And while we hate to pick on a car that screams Yankee Ingenuity with every exhalation of its supercharged V8, driving the Cadillac beyond the track raises a question: What the hell are you supposed to do with this thing?

Paul Revere could have used the CTS-V on his midnight ride, but for him, the fate of an embryonic nation was at stake. When I gallop from Brooklyn to Boston over Thanksgiving weekend, every brush of the Cadillac’s gas pedal threatens to put me in the stockade. Its zero-to-60 time of 3.7 seconds is solidly in supercar territory. It’s certainly a super sedan, including Cadillac’s claim of a peak 200 mph. (Maybe Caddy should bring back the tailfins). And even the most near-sighted cop will spot the Caddy when it charges downhill and puts a quarter-mile between it and the prudent convoy.

Of course it’s fun, as a Sedan deVille with a 6.2-liter Corvette Z06 motor should be. And the Caddy is no parade float, but a virtual sports car with bonus doors. The chassis is hyper-engineered for stiffness, cooling and aero goodness. Caddy’s latest, driver-adjustable magnetic shocks deliver 40 percent faster damping. In tandem with a five-mode electronic limited-slip differential, the CTS-V can play the good Dr. Jekyll or go full-on Hyde. Brembo brakes, including six-caliper, 15.4-inch rotors up front, haul the Cadillac back to civil speeds, even during a frenzied dalliance with the car last summer at Wisconsin’s Road America, where I saw 150 mph on the long straight.

Freeway cloverleafs become gift-wrapped bows that the Cadillac unravels and shreds like it’s Christmas at the juvie home. If your dream is to stick it to a BMW M5 or Mercedes-AMG E63, at least in pure performance terms, this is your car. The Cadillac’s steering is better, for one, transmitting the road surface through your fingertips like Braille to the blind. The wet-sump-oiled version of the Z06’s V8 spools up 80 and 90 more horses, respectively, than the BMW and Mercedes, in a 4,145-lb Caddy that’s lighter than either. Obscene supercharged torque, at 630 pound-feet, wastes its respective German rivals by 130 and 99 pound-feet. The Germans’ only notable performance advantage is their dual-clutch automated transmissions, which are more satisfying than the Cadillac’s conventional eight-speed, paddle-shifted unit.

The Caddy will snap off an 11.6-second quarter mile, rinse and repeat, a time that even the tire-frittering, 707-horsepower Dodge Challenger Hellcat will work to equal at stoplights. The CTS-V also pulls 1 g in lateral acceleration, meaning the Hellcat will dunk into the nearest Stygian ditch if it attempts to keep pace through curves.

So the Cadillac pushes every performance button, and then some. Now try and press the buttons on the baleful CUE infotainment system, and you’ll begin to see where the Cadillac still has work to do to reach German levels of design and desirability.

“Give Cadillac credit: The CTS-V is a radioactive vat of power.”

The Cadillac leads strongly with its front end and carbon-fiber hood, like a stripper from Magic Mike waggling his glittery chains and titanium abs in the audience’s face. Four generous exhaust outlets are well hung out back, and 19-inch alloys look and act the athletic part. Yet somehow, the chunky-waisted Caddy barely got women or men to glance up, let alone stuff dollar bills in its map pockets—not a good sign in an sport sedan that brushed $92,000 with options. The blase reaction was repeated from Wisconsin to New York burbs to New England, so this wasn’t Manhattan snobbery at play. And while Cadillac is right to play up the American-ness of its brand, there remains a whiff of Jersey goombah in its exterior and interior designs that needs to be extinguished, pronto. Honestly? I’d happily trade 150 of the Cadillac’s horses for a sexier body and more sophisticated cabin.

There’s real-deal sport sedan gear inside: Handsome digital driver’s gauges, magnesium shift paddles, body-gloving Recaro seats, the video-based Performance Data Recorder. A 4G LTE WiFi hotspot, curb-view camera and remote starter are among welcome luxury features. But the aforementioned CUE system ranks with Lexus’ prissy joystick controller as the most exasperating interface among luxury brands.Yet busy textures and shapes don’t all play well together, especially with a roster of faux that includes faker metal, simulated carbon fiber and the outdated, smudge-happy piano black plastic that’s best left to budget brands. The back seat isn’t well-packaged or comfortable considering the car’s generous footprint. And the trunk, with its space-stealing gooseneck hinges, is scrawnier than the competition’s. The CTS-V’s meager 14/21 mpg fuel economy draws a $1,000 gas-guzzler tax, with the feds figuring you’ll spend $2,900 a year in premium unleaded. Spurring the CTS-V hard dropped mileage to a sickly 11 or 12 mpg. Sure, mileage isn’t the Cadillac’s mission, but you might like it to top a ‘72 Eldorado.

If it’s any consolation to GM, I’ll throw out a trio of their own four-seaters that are more  affordable, accessible and ultimately more fun: the sparkling new 2016 Chevrolet Camaro SS, the ATS-V sedan or coupe and the CTS Vsport. These cars range from 420 to 464 horsepower, more than enough for any imaginable scenario. They share a version of the CTS chassis and similar top-shelf GM technology. They’ll save you $800 to $1,000 a year at the pump versus the CTS-V. Most significantly, they’ll save you $25,000 to $45,000 in the showroom. At around $61,000 to start, the ATS-V is America’s answer to the BMW M3, smaller and decidedly nimbler than its CTS-V cousin. The CTS Vsport may have a confusingly similar name, but the price couldn’t be clearer: $59,995 out the door for the Performance edition, versus $84,990 for the base CTS-V.

Give Cadillac credit: The CTS-V is a radioactive vat of power. Dip in a toe, and it’ll turn you into a superhero, without (mostly) threatening to kill you. But superheroes can be hard to cozy up to. When it comes to mortal drivers and the real-world Metropolis, the Camaro, Vsport and ATS-V all urge me to go faster. The CTS-V is forever telling me to slow down. Which kind of car would you rather drive?