A big turbo, electric antilag, and a brutish hybrid system make the new AMG C63 quicker than a Hellcat to 60 mph. 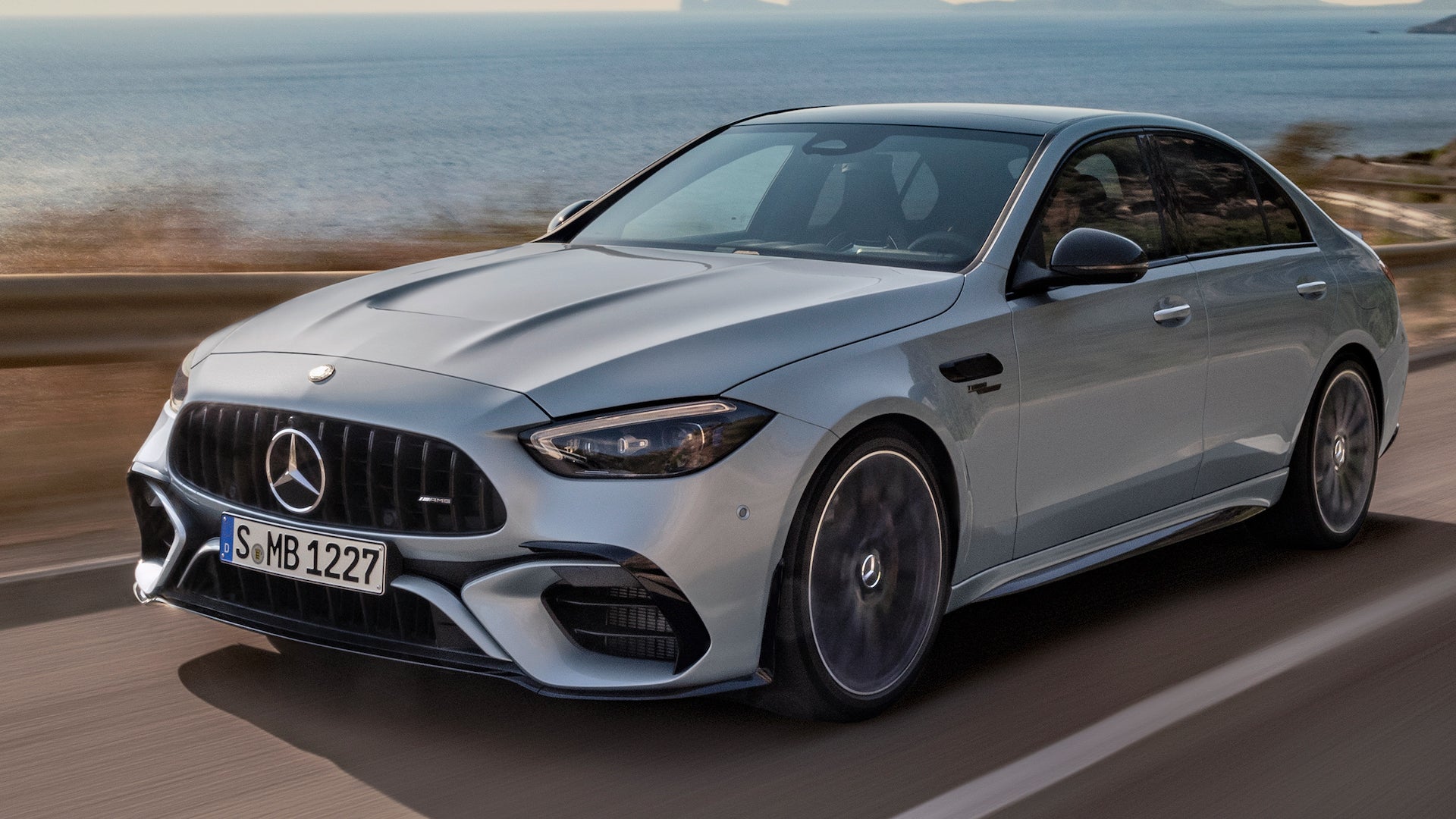 The day has finally come when the meanest Mercedes-AMGs have four-cylinder engines. A dark day it isn't, however, because the 2024 Mercedes-AMG C63 S E Performance's four-banger is juiced with boost and Formula 1-derived hybrid tech. It's not just the most powerful series-production four-cylinder in history—it's way more powerful than the V8 model it replaces.

At the core of this new C63 is the 2.0-liter M139 four-cylinder shared with the AMG A45, but with serious upgrades to its exhaust-side hardware. It features an enlarged turbocharger with a 400-volt electric motor on its shaft, providing F1-style electric anti-lag. This allows the engine to generate 469 horsepower and 402 pound-feet of torque on its own, further raising the bar for what was already the world's punchiest production four-banger.

A powerful plug-in hybrid drive unit mounted on the rear axle augments its power, the two being joined by an all-wheel-drive system and a nine-speed, multi-clutch automatic transmission. This AMG-exclusive rear end couples a limited-slip differential with a 150-kilowatt electric motor, equipped with a two-speed reduction gearset for performance across a wider range of speeds (much like the Porsche Taycan's rear end). Drawing from a 6.1-kilowatt-hour battery, it can propel the car on its own at speeds of up to 77 mph, or for a distance of up to eight miles, and offer an EV-style one-pedal driving mode to boot.

More importantly to most of us though is how the electric motor's 201 hp and 236 lb-ft of torque amplify the combustion engine, for a total system output of 671 hp and 752 lb-ft. They hurtle the C63 from 0 to 62 mph in 3.4 seconds—quicker than a Dodge Charger Hellcat—and on to a top speed of 174 mph. Let German tuners at it and it'll probably get there quicker still.

That's a hell of a feat for a sedan that's also heavier than a Charger Hellcat, at 4,654 pounds. About 52 percent of the weight is concentrated in the rear, though, so it's easily carried by the car's combo of air suspension, active damping, and standard four-wheel steering. (Available forged wheels may even take a couple of pounds off that if you care.) Drift mode further enlivens what's already far from a boring car, while six-piston front calipers and one-piston rears—remember, there's regen back there—can bring things back in line before the police show up. Not bad for a car that's estimated to get 34 miles per gallon.

The 2024 Mercedes-AMG C63 S E Performance sedan will absolutely overflow your bowl of alphabet soup when it hits the market in 2023. It also may eventually be offered in other body styles, as AMG's Chief Technology Officer Jochen Hermann hinted "maybe there's more to come" when asked about a coupe or convertible. Or, while we're dreaming, a wagon, though a lifted crossover wouldn't be bad as compromises go.